A Saudi newspaper caused uproar in the Muslim world on Sunday after publishing a fabricated report by the World Health Organisation (WHO) viewed as fuelling sectarian tensions.

The London-based Asharq Al-Awast, which is owned by the Saudi Research and Marketing Group, published an article on Sunday titled “International warnings of ‘illegitimate pregnancies’ in Karbala”. 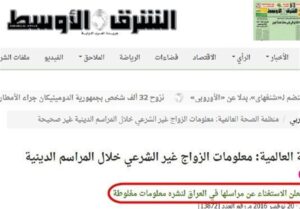 The article which was published as millions of mainly Shiite pilgrims arrived in Karbala to commemorate the fortieth day after Imam Hussein’s martyrdom, claimed that the WHO issued a report saying the large-scale pilgrimage had caused “illegitimate pregnancies among 169 Iraqi women” last year.

However, the WHO on Sunday denied the statement attributed to it, which it said appeared earlier this week, and which was rebuffed by the organisation on Friday.

“The [World Heath] Organisation condemns in the most severe terms the use of its name in a fabricated report that does not in any way conform to the principles of the organisation,” read the WHO’s statement.

“The organisation is investigating the source of the false report and could take legal action against its publisher,” the statement added, as reported by The New Arab.

Rana Sidani, a spokeswoman for the WHO said the organisation was shocked at the publication of the fabricated report by Asharq Al-Awsat after the international group had denied the report on Friday.

Sidani, who made the remarks in a televised interview, added that the WHO is consulting with the Iraqi ministry of health on possible legal action against the paper.

Following the condemnations by the WHO and Iraqi officials, Asharq Al-Awsat published a correction and announced that it has fired the paper’s editor in Baghdad who was responsible for the publication of the story.

Meanwhile, public condemnations of the paper continue, with calls to prosecute the paper and ban it from circulation for insulting Iraqi women.