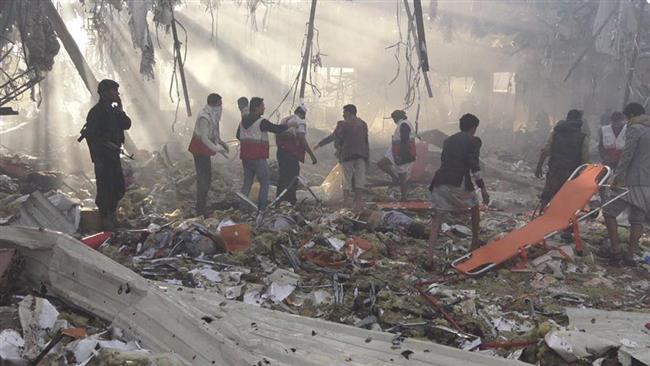 Saudi warplanes have carried out airstrikes against the Yemeni capital Sana’a, targeting a crowded funeral ceremony.

A statement by Yemen’s Health Ministry says at least 144 people were killed in the assaults. The Saudi jets conducted at least nine airstrikes on Khamis street in southern Sana’a. The building where the event was underway was seriously damaged in the attacks.

The number of casualties is highly likely to rise. Over 527 people have  been injured, as reported by Entekhab and translated by IFP.

The funeral was for the father of Jalal al-Roweishan, the interior minister in the Yemeni government, Press TV reported.

Yemen’s al-Masirah television said hospitals in the capital were desperately in need of blood donations.

In September last year, Saudi jets bombarded a wedding ceremony in the town of Mokha in the southwestern province of Ta’izz, killing over 130 civilians. The victims were mostly women and children.

Saudi Arabia has been engaged in a deadly campaign against Yemen since March 2015. Riyadh’s aggression, which has killed more than 10,000 in Yemen, was launched in an attempt to restore power to Abd Rabbuh Mansur Hadi, a staunch ally of Riyadh who has resigned as Yemen’s president but seeks to force his way back into power. The campaign also seeks to undermine the Houthi Ansarullah movement.

The Houthis reacted to the airstrikes, with spokesman Mohammad Abdulsalam strongly denouncing the deadly onslaught.

Yemeni fighters will take revenge on the “ruthless thugs” of Saudi Arabia, the Houthi spokesman said. “Bloodshed is only followed by more bloodshed.”

He also held the United Nations responsible for the massacre over its silence toward the deadly Saudi raids that have become regular.

Abdulsalam also slammed the international community for turning a blind eye to the Saudi aggression against Yemen, which has so far paved the way for the regime in Riyadh to further destroy the impoverished country with US-made weapons.

The Ansarullah official called on Yemeni forces and fighters from the Popular Committees to intensify attacks against Saudi targets.