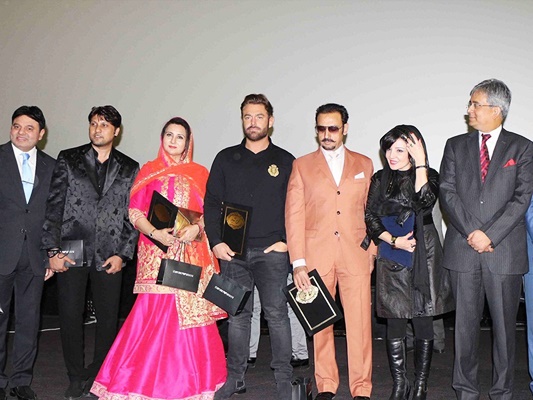 The long-awaited joint production of Iran cinema and Bollywood was finally released in Iran on December 1 and so far has set new records at the box office.

Directed by Iranian filmmaker Qorban Mohammadpur and featuring Iranian and Indian stars Mohammad Reza Golzar and Dia Mirza, the melodrama had a massive opening day sales with 6 billion rials ($155,000), more than double the amount of the previous record-holder, Asghar Farhadi’s ‘The Salesman’, which took in $67,500 on its first day earlier this year.

The high sale on December 1 was also the highest for a single day recorded for any movie in Iran’s cinema history.

As the public kept packing movie theaters on Friday (Dec. 2), the film became the fastest to reach 10 billion rials ($260,000) in only two days, breaking the record of ‘The Salesman’ which was released three months ago and raked the amount in three days.

According to local news outlets, a formal ceremony for the film opening was held at Kourosh Cineplex in west of Tehran on Saturday (Dec. 3) in the presence of the Iranian and Indian cast and crew as well as a huge audience who rushed to see the movie stars, particularly Golzar.

Golzar, 39, appreciated the invaluable assistance of the Indian team that supported the Iranian group in their first joint production as the Iranian side had no experience of making a film in Bollywood. He thanked the famous Indian actor Gulshan Grover for his cooperation.

Grover, 61, has acted in over 450 films. He is among the first actors to have made a successful transition from Bollywood to Hollywood and international cinema. He is nicknamed the “bad man” in Bollywood as he mostly appears in negative roles.

At the ceremony, Grover acknowledged the talent of the Iranian filmmaker and actors and expressed joy for being a part of the movie. He has collaborated with many top actors in Hollywood; however, paying respect to the Iranian movie star, he said, “Golzar is better than many of them like Brad Pitt and Tom Cruise.”

Indian Ambassador to Iran Saurabh Kumar appreciated the efforts by the Iranian director and producer of the film. “In the 1980s, many Iranians studied in India and fortunately the relations between the two countries have improved. Iran’s Foreign Minister Mohammad Javad Zarif is in New Delhi now to attend the Heart of Asia Conference, and we are celebrating the cinematic collaboration of Iran and India here.”

The movie’s leading actress Dia Mirza, 34, is scheduled to come to Iran on December 20.

Well-known Indian filmmaker Akbar Khan was also among the guests invited for the program. The historical drama series ‘Sword of Tipu Sultan’, one of the works he has directed, was shown on the state TV in Iran almost 25 years ago and was quite popular with the Iranian audience at the time.

‘Salaam Mumbai’ narrates the story of two medical students from two different backgrounds and explores their tumultuous romantic relationship. It touches the cultures and lifestyles of both Iran and India.

A typical Bollywood film contains singing and dancing; however, such scenes are not allowed in Iranian movies. But the film has three songs performed by famous Indian singers Sonu Nigam, Arijit Singh and Shabbir Kumar as well as one track by the young Iranian pop singer Benyamin Bahadori, 34, who has made his first appearance in a feature film with ‘Salaam Mumbai’. Two more tracks by Benyamin are also used for the beginning and ending credits.

Almost 80% of the film was shot in India and the rest in Iran. Actors speak in English and Hindi. The film has Persian subtitles for the Iranian audience.

The movie has been widely released across the country. It is on screen at 25 movie theaters in Tehran and 75 halls in other cities.

The international screening of the film will start from Australia and the US in January 2017 and will be followed by showing in the UK, Canada, Germany, Sweden, Norway, Denmark, Pakistan, Bangladesh, Sri Lanka and Arab countries.

It will be released in about 3000 cinemas in India after its screening in Iran, most likely in March.

The film is co-produced by Javad Norouzbeigi from Iran and his Indian counterpart Pahlaj Nihalani. The Indian film company Motion Pictures will help with the international distribution of the work.