Saddam’s Cousin Arrested in a Water Tank in Kirkuk! 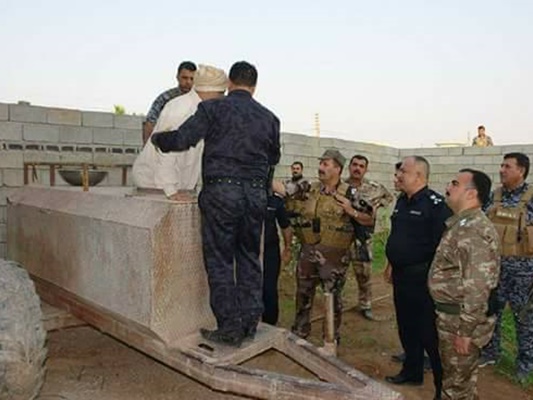 The Kirkuk Police Directorate announced on Tuesday that the cousin of the former Iraqi dictator Saddam Hussein has been arrested in south of Kirkuk for participating in the recent attack launched by the Islamic State on the province.

Kirkuk Police Chief, Brigadier General Sarhad Qadir, said that “Police forces carried out extensive raid and search operations in Daquq district (35 km south of Kirkuk), and managed to arrest Nizar Mahmud Abdul Ghani, cousin of former president Saddam Hussein, along with one of the ISIS members who attacked the province recently.”
“The detainee confessed during the preliminary investigation that he is a cousin of the former President Saddam Hussein and participated in the latest attack launched by the ISIS on Kirkuk,” Qadir added, as reported by Iraqi News and covered by Arya News Agency.
“Abdul Ghani is a former officer in the private security service, while his brothers are working with the ISIS southwest of Kirkuk,” Qadir explained. “The security operation also resulted in the confiscation of four Kalashnikov weapons and quantities of ammunition,” Qadir said.
He also told Sumaria News that Saddam’s cousin was arrested in a tanker.