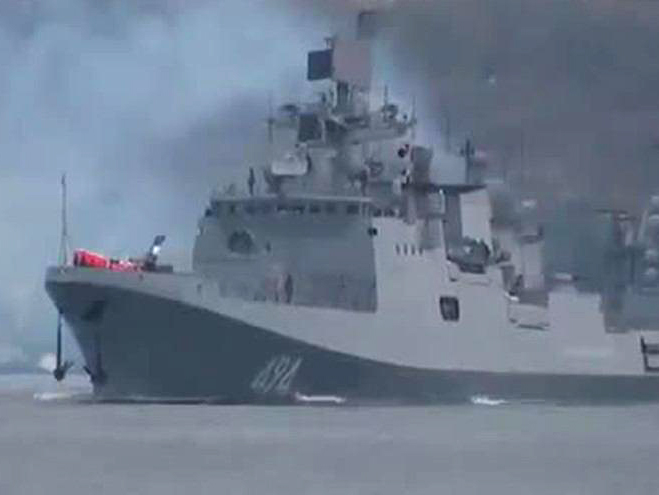 “Today, we started a large-scale operation on launching massive strikes on ISIS and al-Nusra Front targets in the Idlib and Homs provinces [in Syria],” Shoigu said, according to a report covered by Al Alam.

Accoridng to him, Admiral Grigorovich frigate, Bastion coastal missile systems and “for the first time in history of the Russian Naval Forces” Admiral Kuznetsov aircraft-carrying cruiser take part in the military operation.

“Admiral Grigorovich [frigate] takes part in the operation. Today, it launched Kalibr cruise missiles on [terrorist] targets that had been confirmed by intelligence data and determined in advance,” the minister said at a meeting of Russian President Vladimir Putin with top officials of the Russian Armed Forces.

Shoigu said that the Russian Armed Forces launch strikes on terrorists’ plants in Syria, especially those producing poisonous substances. “It’s clear that it’s a well-organized industrial production, that’s why we carry out strikes [on terrorist plants].”

“Ammunition depots, terrorist training centres and plants producing different means of unconventional weapons are the main targets of the strikes.”

Russia will continue strikes on terrorists’ industrial and military sites in Syria, Shoigu said, as reported by Sputnik.