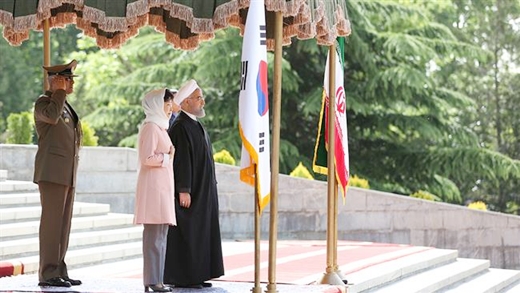 President Hassan Rouhani says there is suitable ground for foreign investment in Iran as he receives his South Korean counterpart Park Geun-hye in Tehran.

President Park was accorded an official welcome in Tehran on Monday on the first day of her three-day visit, heading South Korea’s biggest-ever travelling business delegation of over 230 executives.

The two presidents then sat for their first meeting since the establishment of diplomatic relations between the two countries in 1962.

Later in a joint news conference, Rouhani called for peace on the Korean Peninsula, saying Iran is opposed to the manufacturing of weapons of mass destruction of any kind.

He said Iran and South Korea are set to boost their trade volume from the current $6bn to $18bn as the two sides signed 19 cooperation agreements.

For her part, President Park called for further expansion of ties between Iran and South Korea in industrial, trade and cultural sectors.

South Korea has said it is eager to participate in Iran’s development projects and expand economic cooperation on communication technology, information, healthcare and culture.

South Korea has been a major importer of Iran’s crude oil. On Sunday, Minister of Petroleum Bijan Zangeneh said Iran’s oil exports to South Korea have more than quadrupled to 400,000 barrels a day since sanctions were lifted in January.

Iran, whose exports to South Korea were less than 100,000 barrels a day before sanctions were lifted, has since worked to boost its output quickly. It has focused on selling to its traditional customers in Asia, but has also shipped to Europe.

According to data from Energy Aspects, global imports of Iran’s crude rose in March to 1.90m bpd, from 1.51m bpd in February.

Zangeneh also said Iran and South Korea were working to resolve difficulties in transferring payments for the oil sales.

World leaders have been visiting Tehran after the implementation of the nuclear agreement, dubbed the Joint Comprehensive Plan of Action (JCPOA), between Iran and the P5+1 group of countries in July 2015.

In a message on his Instagram account on Sunday, President Rouhani said Iran is open to foreign investment. “Our economy will not improve unless we are able to attract investment,” he said.

“Today, these conditions have been provided and the leaders who travel to Iran bring with them representatives of scores of important trading companies,” Rouhani added.