Rouhani: Parliament and Government Must Work Together for Economy and Environment 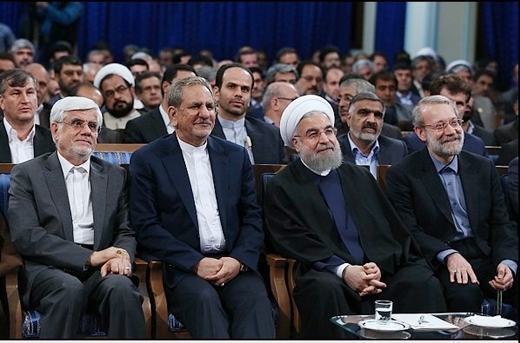 President Hassan Rouhani underlined that for economic growth to gather pace, the Parliament and Administration need to close ranks.

Rouhani made the remarks in a dinner feast attended by lawmakers-elect who secured victory for the next parliament in the February elections and April runoff.

“The common goal of the Administration and Parliament is to resolve problems and satisfy people’s expectations,” IRNA quoted Rouhani as saying.

The president also offered his thanks and gratitude to the outgoing parliament, saying that the people’s expectations of the legislative and administrative branches are crystal clear.

“The people wish for coordination and harmony between the legislative and administrative branches in order to address the country’s fundamental challenges.”

Elsewhere in his remarks, Rouhani referred to the parliamentary elections, saying that the outcome indicated that Iranians continue to believe in the moderate movement of the Islamic Revolution.

Rouhani chose a motto of moderation for his presidential campaign in 2013, overwhelming his rivals and winning a landslide victory. Also, he vowed to end Iran’s impasse with the West over its nuclear program. In July 2015, after a two-year marathon of negotiations, he delivered his promise of forging a deal with the six world powers (the five permanent members of the UN Security Council plus Germany).

Current Majlis [Parliament] Speaker Ali Larijani and Mohammad Reza Aref, leader of the coalition of reformist and moderate MPs in the next parliament, also spoke to the participants.

Larijani, who acted as chief nuclear negotiator when he served as the secretary of the Supreme National Security Council from 2005 to 2007, said, “The Islamic Republic system took a guarded and timely decision in brokering a deal with the G5+1… and this has provided an opportunity and a new climate for the country in terms of investment, development and diplomatic interactions.”

Aref also said that national unity is more urgent than at any other time. He also said that the next Majlis sees itself as a partner to the government in developing the country.

Aside from economic concerns, which have been a running theme in Rouhani’s speeches, he said his administration’s top priorities are to address environmental challenges and deal with shortage of water resources.

“Almost all the provinces of the country are grappling with water shortages. A lot has been already done to address the challenge and these efforts will continue nonstop,” the President said.

He also pointed out that a major objective of the government is to continue to bring down the inflation rate, reducing it to a single digit.

“In the year 1395 [current Iranian calendar year, started on Mar 20] inflation will fall to a single-digit rate, and more importantly, this is the first time in the history of the country’s economy that inflation has been continuously decreasing.”

Rouhani’s economic woes are quite justified, as the country is only now emerging from years of economic sanctions. The administration has fared well, however, curbing the soaring inflation, reducing it from a high of more than 40% to a low of less than 12%.

It is hoped the new parliament make-up, which includes distinctively moderate figures, can help the Rouhani administration to speed up the economic recovery.