Rally Held in Tehran to Remember Armenian Killings of 1915 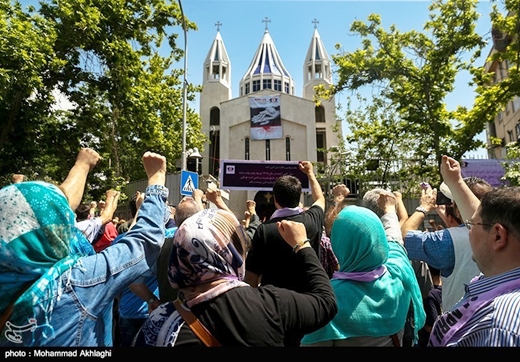 Iranian Armenians gathered at a cathedral in Tehran on Sunday to commemorate victims of the killings of ethnic Armenians by Ottoman Turks over a century ago.

A large crowd of Armenian citizens, sporting purple signs, converged on Saint Sarkis Cathedral in central Tehran to mark the 101st anniversary of the 1915 massacre of Armenians in what they say was a genocide by the Ottoman Turks.

An estimated 1.5 million Armenians were killed and their property destroyed or confiscated during the period of 1915 to 1923 when the Ottoman Empire collapsed, and many survivors and their descendants scattered into a diaspora that has placed Armenian enclaves in more than 100 countries.

Turkey’s government has expressed condolences to Armenians but has denied that the killings constituted a genocide, arguing that many Ottoman Turks also were killed in that era of war and upheaval.

Ankara believes that up to 500,000 Armenian were killed, but mostly due to war and starvation.

In 2014, the then Turkish prime minister, Recep Tayyip Erdogan made unprecedented condolences to the grandchildren of Armenians killed at the time, but the legacy remains an obstacle to reviving frozen relations between Ankara and Yerevan.