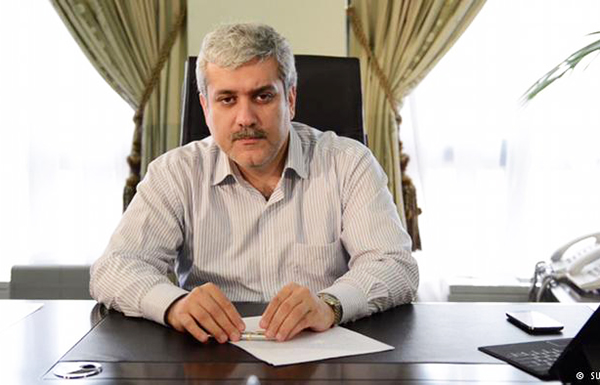 Iran seeks to be the superpower of science and technology in the region and stand atop the Islamic world, said Sorena Sattari.

The journal Science has conducted an interview with Iranian Vice President for Science and Technology Dr. Sorena Sattari on the sidelines of the 70th session of the United Nations General Assembly. The Islamic Republic News Agency published a translated version of the interview on October 3. The following is the original interview that sciencemag.org posted online:

During his two years in office, Iranian President Hassan Rouhani has filled his cabinet with Ph.D.-trained technocrats. One of the youngest is Sorena Sattari, the vice president for science and technology. A mechanical engineer by training, Sattari, 43, has been a forceful proponent of yoking science more tightly to the economy and says he would like to imbue Iran with an “entrepreneurial spirit.” His Innovation and Prosperity Fund has handed out $600 million in low-interest loans to 1650 technology startups and to other firms seeking to branch out in new directions.

He has not turned his back on basic research, however. He cites as “a point of pride” for his country the $30 million Iranian National Observatory, a world-class, 3.4-meter optical telescope that is expected to see first light in four or five years. Backers credit him with helping get the long-delayed project back on track earlier this year (Science, September 4, p. 1042). Sattari spoke with Science last week on the sidelines of the United Nations General Assembly. This interview has been edited for brevity and clarity.

Q: Your father, Mansour Sattari, was commander of the Iranian Air Force during the Iran-Iraq war. That was a difficult time to come of age.

A: I spent a lot of time on Air Force bases during the war. Before the revolution [in 1979], Iran had one of the most advanced air forces in the world. But when U.S. military advisers left the country during the revolution, we realized we didn’t understand the technology. I think that’s why Saddam Hussein attacked us. He thought we would survive only three months. Iranian pilots were flying aircraft that weren’t reliable because they weren’t maintained well. But we learned how to stand on our own feet. Two days before [the] war ended, we had our last air combat with Iraq. For the first time, we shot down a MiG-29. We used an F-14 aircraft with an Iranian missile. We learned how to build new weapons. That was the start of the Iranian missile program. It was a result of international sanctions.

Q: The war and sanctions hardened the Iranian psyche.

A: The war was difficult, but what was harder was what went on under the skin of society. Many women lost their husbands, and parents lost their sons. Sometimes I get scared when the phone rings at night, because I think it must be very bad news. That fear comes from those times.

Q: Your father died in a military plane crash in 1995. Did you think to follow his path into the military?

A: My father didn’t want me to go into the military and didn’t ask me to. He was martyred when I was 22.

Q: You had just finished your master’s degree in mechanical engineering at Sharif University of Technology.

A: After I lost my father, I had to take care of my family. I left school and started working in the oil and gas ministry. After I collected enough money for my family, I went back to Sharif and completed my Ph.D.

Q: In December 2013, Iran put a monkey named Fargam [“auspicious”] into orbit and safely brought him back to Earth. What’s next for the space program?

A: We will have to change how we manage the space program, both the technology side and the business side. We’re hoping that with [the] help of foreign companies, we can commercialize the program.

Q: Iran and Russia are talking about jointly developing remote-sensing satellites for environmental monitoring. Does this represent a deepening of scientific ties?

A: We are now becoming very serious in our relationship with Russia. We have formed for the first time a joint commission on science and technology cooperation, which is much higher level than our economic joint commission. It’s headed by the deputy prime minister of Russia and myself. For the first time, science and technology is driving the relationship between our countries.

Q: You said recently that “the most important responsibility” of your vice presidency is changing Iran’s oil-based economy into a knowledge-based economy.

A: Before sanctions, our government got 85% of its revenues from oil. This year, we got less than 25% from oil. But we have not succumbed to this pressure. Resistance is ingrained in our nature; it is in Iranian genes. Our mindset has changed because of the sanctions. Now, we believe in investing in science and technology. Innovation is essential to creating a knowledge economy.

Q: You’ve talked about privatizing Iran’s research institutes. Do you have a concrete plan?

A: I have a mental model. There must be a difference between grants for pure research and support for projects that have potential to become a business. Government funds should be used to expand the boundaries of science. We have wasted a lot of money on institutes that are not contributing to the economy. We thought that we could use oil money to simply buy whatever technology we need. We thought that if we have a building and equipment, we could achieve results. But you have to acquire expertise. In many of our institutes, frankly, we need a new way of thinking.

Q: In a speech at the University of Tehran in October 2013, President Rouhani pledged to increase academic freedom at Iranian universities. Are conditions improving?

A: It’s unprecedented for an Iranian president to walk in and out of a university and talk to students without some sort of protests. We never experienced this before. It shows how supportive the majority of university students are of his policies. The university atmosphere has become much better compared with the past. Iran is becoming more open. If the United States wants to create a serious scientific relationship, this is the time.

Q: This summer you were appointed to the Supreme Council of Cyberspace. One of its tasks is to accelerate the launch of a national intranet. What is the purpose of this network?

A: Many countries are building similar networks. It will increase the speed and security of information transfer. And this does not have political intentions behind it.

A: The Internet has a good face and a bad face. In the Middle East we have lots of challenges. For example, we have [the Islamic State group] recruiting on the Internet. It’s very scary to see what’s happening in the region. We want to make sure our data hubs remain in Iran. We don’t want messages to go out of the country and then come back in. We want more security.

Q: According to the Supreme Council of the Cultural Revolution’s master plan for science, “the revival of the great Islamic civilization” is “contingent upon all-out progress in science.” What does that mean?

A: It means that we want to be the superpower of science and technology in the region. And we also want to be No. 1 in the Islamic world as well.