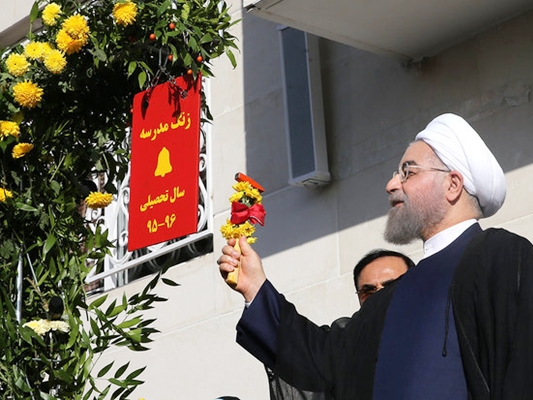 President Hassan Rouhani in a symbolic gesture rang the bells at a girls’ high school in downtown Tehran on Saturday to mark the first day of school year in the country.

Each year, Iranian students start the school year on September 22 (the first day of autumn on the Iranian calendar) after a three-month summer vacation. This year, the schools were officially opened by President Rouhani on September 24, as the first two days were the weekend.

Rouhani symbolically started the new school year by ringing a bell at Narjes Girls’ High School in central Tehran, as reported by Mehr and edited by IFP.

As the school year was started by the President, over 1,000 educational and sports projects were inaugurated across the country.

During the speech delivered by Rouhani, he raised a question for the student competition dubbed Question of Mehr: Where does violence stem from? How some people learn violence, and how can one stand against it? How can we have a society with Islamic kindness, and how can we free the societies in our region and the world from violence?

Last year’s Question of Mehr was focused on post-sanctions opportunities.

Iranian presidents traditionally take part at the ceremonies to open the first day of school year with a question for Iranian students across the nation. The best answer to the question is rewarded by Iran’s Ministry of Education, after collecting replies in the first month of the school year.