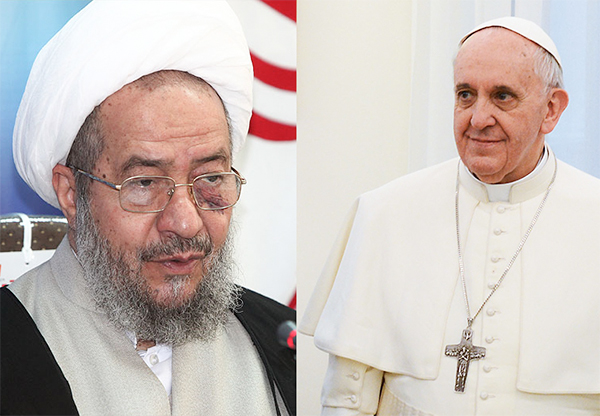 Representing the Vatican City, Cardinal Peter Turkson visited the holy Iranian city of Qom at the invitation of Qom Seminary, where he held meetings with senior officials of the Islamic educational body, and attended a conference entitled “The Role of Religions in the Realization of Justice and Peace from the Viewpoints of Islam and Christianity”.

In an address to the conference, Ayatollah Morteza Moghtadaei, the secretary of the Supreme Council of Islamic Seminaries (SCIS), praised Cardinal Turkson for accepting the Seminary’s invitation, and described the visit as “a positive step” for the establishment of closer ties between Qom Seminary and the Vatican.

He announced that Cardinal Turkson had had a good meeting with the Seminary president on Friday night. During the meeting, it was decided that a group should be formed to examine the ways in which Islam and Christianity can co-operate on a global level.

“We wish to stay abreast of the Vatican’s plans for establishment of peace throughout the world,” Ayatollah Moghtadaei noted, adding that Qom Seminary is also keen to make the Vatican familiar with Islam’s plans through the Catholic Church’s close ties with Muslim clerics.

Ayatollah Moghtadaei further highlighted the ongoing wars and massacres across the world, saying that terrorist groups are currently killing and exploiting people, with many women and children being killed in Yemen and Bahrain.

He called on the Pope to use his influence with European heads-of-state, and to order them to stop arming militants such as Daesh [ISIS], who kill numerous Muslims, including women and children, every day.

He urged Cardinal Turkson, who is the President of the Pontifical Council for Justice and Peace, to deliver this message to Pope Francis: “Jesus Christ orders (his followers) to eradicate the roots of tyranny; so does the Prophet of Islam.”

“You are the president of a council whose responsibility is to spread peace and justice, and we want you to deliver our message to the Pope,” he added.

“Please deliver this message to him that we, Muslim clerics, want you to use the influence God has given you, and to order them to cut off their support of Daesh, so that oppressed Muslims can be freed, and the roots of Daesh can be eradicated,” the Iranian cleric noted.