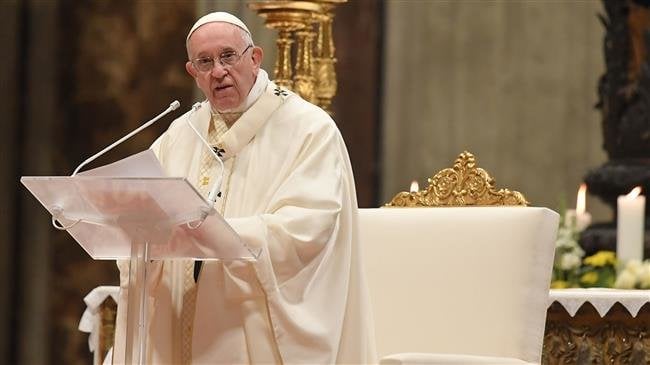 Pope Francis, the head of the Roman Catholic Church, has in strongest terms ever condemned the Saudi-led coalition’s war on Yemen, urging the warring sides to respect a “fragile” peace deal, shortly before starting his historic visits to the UAE and Saudi Arabia.

“The cry of these children and their parents rise up to God,” the Pontiff told tens of thousands of people in Vatican City on Sunday, before traveling to the United Arab Emirates which is a part of the Saudi-led coalition fighting in Yemen since 2015.

“The people are exhausted by the long conflict and many children are hungry, but humanitarian aid isn’t accessible.”

“Let us pray strongly because they are children who are hungry, who are thirsty, they don’t have medicine and they are in danger of death,” he said.

The Pope said that he was following the urgent humanitarian crisis in Yemen with great concern during the first-ever papal visits to the Arabian Peninsula. He also urged all sides to implement a fragile peace deal and help deliver food, water, and medicine to millions of hungry people.

Also on Sunday, the United Nations mission in Yemen warned warring sides that the Hudaydah truce is fragile.

Retired Dutch General Patrick Cammaert, who also chairs Redeployment Coordination Committee (RCC) – a UN-appointed committee tasked with monitoring the Hudaydah ceasefire – made the comment during meetings with former government officials and Ansarullah forces aboard a ship anchored off the key port city.

He said the talks were cordial and constructive and urged both sides to observe the ceasefire. Cammaert said any violations would jeopardize the Stockholm Agreement and the Yemeni peace process.

The talks were held on a ship because the representatives of Ansarullah refused to enter areas controlled by Saudi-led aggressor forces.

According to a UN statement, Cammaert boarded the vessel on Saturday and picked up representatives of the former regime at a rendezvous in the Red Sea before returning to Hudaydah to await Houthi envoys, who arrived later on Sunday.

The RCC was formed on the back of an agreement reached under the auspices of the UN in Sweden last December.

The breakthrough deal calls for a ceasefire in Hudaydah — which has been under a Saudi-led siege — the withdrawal of both Saudi-backed forces and the Yemeni defense units from the city, and the deployment of UN observers there.

Saudi Arabia and some of its vassal states invaded Yemen four years ago to restore a Riyadh-aligned regime that had resigned and fled the country. The Houthis and their allies — who have since been running state affairs — have been defending the country against the Saudi-led invasion.

The onslaught has killed tens of thousands of people and driven the entire Yemen close to the edge of famine.

Pope Francis raised his criticism of the war in Yemen before boarding a flight to Abu Dhabi, where he was warmly greeted by its Crown Prince Sheikh Mohammed bin Zayed al-Nahyan.

Vatican officials have said it is not clear whether Pope Francis will address the sensitive subject in public or private during his visit to Abu Dhabi, which is aimed at promoting interfaith dialogue.

The Pontiff has also been urged to use the historic visit to raise human rights concerns with Arab officials.

The UAE faces criticism from human rights groups for jailing activists, including Ahmed Mansoor, an Emirati who is serving a ten-year sentence for criticizing the government on social media.

“We are calling on Pope Francis to raise the issue of their incarceration with his hosts, and urge their immediate and unconditional release,” Amnesty International said in a statement on Saturday.

“The UAE authorities are trying to brand 2019 as the ‘year of tolerance’ and are now seeking to cast the Pope’s visit as proof of their respect for diversity. Does this mean they are ready to reverse their policy of systematic repression of any form of dissent or criticism?” said Lynn Maalouf, Amnesty International’s Middle East Research Director.

“Since 2011, the authorities have systematically cracked down on their critics, including activists, judges, lawyers, academics, students and journalists by way of arbitrary detentions, enforced disappearance, torture and other-ill-treatment”.

Amnesty have said that the papal visit should not be used as an opportunity to mask over human rights violations taking place within the UAE.

“It will take more than symbolic meetings to gloss over the UAE’s appalling human rights record. The fanfare around Pope Francis’ visit will be missed by the many human rights defenders, including Ahmed Mansoor, Nasser bin Ghaith and Mohammed al-Roken, who are serving lengthy prison sentences simply for exercising their right to freedom of expression. We are calling on Pope Francis to raise the issue of their incarceration with his hosts, and urge their immediate and unconditional release,” said Maalouf.