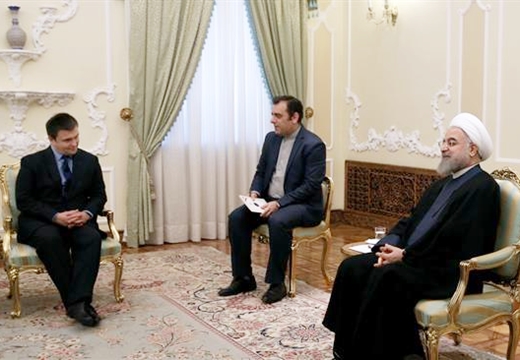 In a Sunday May 29 meeting with Klimkin in Tehran, Rouhani said peaceful solutions are the only means to guarantee lasting peace and to solve regional crises.

The Iranian President further described Ukraine as a friendly state in Eastern Europe and said, “Tehran seeks further expansion of amiable relations” with Ukraine in all spheres, particularly in the economic and energy sectors.

“Interactions among banks of the two countries can pave the way for the enhancement of joint economic and trade cooperation,” Rouhani said.

The top Ukrainian diplomat, in turn, said Iran was a “great country” with a deep-rooted history and rich culture, and said that Kiev wants closer relations with Tehran.

In the roadmap designed to deepen Iran-Ukraine ties, Kiev seeks to bolster relations with the Islamic Republic in different fields, including economy, energy, science, tourism, culture and farming.

The Russian-speaking regions in eastern Ukraine, particularly the Donetsk and Lugansk regions, have been the scene of heavy fighting between Kiev’s forces and pro-Russia protesters since 2014.

According to the United Nations, over 9,000 people have lost their lives and some 20,000 have been injured in the conflict since April 2014.

In the latest development on Sunday, five Ukrainian soldiers were killed and another four wounded in fresh clashes with pro-Russians in the east, the second biggest casualty toll in a single day this year.

The two sides have so far signed two peace deals aimed at containing the violence, but the both sides continue to trade accusations of breaking the deal. Diplomatic efforts are currently underway to ensure the full implementation of the truce agreements.