Park Guen-hye Hopes for New Chapter Between Seoul and Tehran 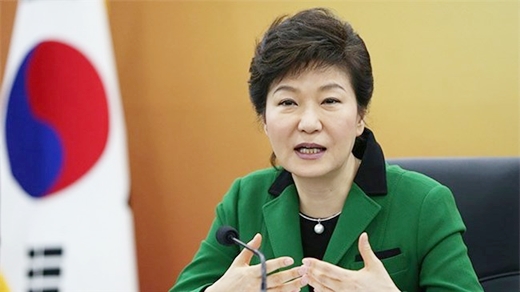 Park Geun-hye will be accompanied by Seoul’s biggest-ever traveling business delegation of over 230 executives during the visit. Local reports suggested the two countries are expected to seal deals worth $10bn.

Officials in Seoul say the primary purpose of the visit is economic as Korean companies eye deals in areas such as construction, automobiles and electronics.

South Korea is also eager to boost its oil supply from Iran, which used to account for 10% of its oil imports before sanctions were imposed.

Iran Daily spoke with President Park ahead of her landmark visit to Tehran.

In spite of several ups and downs, in general, Tehran and Korea have maintained a positive economic relationship and have not experienced any major diplomatic issues; yet, you are the first South Korean President to visit Iran. Why was the present moment chosen for this visit?

Since the establishment of diplomatic relations in 1962, Korea and Iran have advanced economic cooperation and continued cultural exchange. From a political perspective, however, bilateral interactions have so far been relatively less vibrant than would have been desired for various reasons.

The recent conclusion of the Iranian nuclear deal provided a valuable opportunity for our two countries to seek new ways to cooperate. The purpose of my visit is to further promote bilateral relations in the years to come. My visit is the first by a Korean president since the establishment of diplomatic relations, and I have high hopes that it will become a starting point for more active interaction between our two countries.

I hope our two nations will be able to write new chapters together in history, for mutually beneficial cooperative ties not only in economic fields, but also in more diverse areas.

Which delegations are accompanying the president on this visit to Tehran and what missions are they pursuing?

I will travel with official aides, including four key cabinet ministers, and a delegation of 230 business leaders not only from large conglomerates but also a number of strong small- and medium-sized enterprises. The government officials will hold separate talks with their Iranian counterparts and explore diverse measures to work together, such as through the signing of MOUs. The business delegation is scheduled to hold a Korea-Iran business forum and one-on-one meetings.

Notably, the companies represented in the delegation cover all lines of business that are deemed promising for economic cooperation with Iran, including infrastructure, energy, manufacturing and health care.

It is my hope that there will be in-depth consultations this time in areas where there is a potential for substantive cooperation so that a new framework for economic cooperation between our two countries will be forged.

I think it is very meaningful that the Iranian nuclear issue was resolved through negotiations between Iran and the countries concerned. I hope the conclusion of negotiations on the nuclear issue will set a milestone in not only bringing about peace and stability in the Middle East, but also bolstering the international nonproliferation regime.

To that end, I believe it is important to faithfully implement international agreements, including United Nations Security Council resolutions and the Joint Comprehensive Plan of Action between Iran and the P5+1 (the five permanent members of the UN Security Council — China, France, Russia, the United Kingdom, the United States—plus Germany).

How has Seoul’s political stance changed toward Tehran since the resolution of the nuclear challenge? Besides furthering the economic ties, can the South Korean president’s visit to Iran be considered a remarkable progress in political interactions as well?

We welcome the adoption of the resolution lifting sanctions against Iran. I hope that Iran will achieve new development and prosperity based on cooperation with the international community.

I expect this visit at this point to be an important opportunity to achieve great progress in our bilateral cooperation in all related fields.

I hope the future expansion of high-level political exchange, including meetings of foreign ministers on a regular basis, and the revitalization of the Korea-Iran Joint Economic Committee represented by ministers of commerce of the two countries, will help further accelerate our economic cooperation.

South Korea has generally not taken a clear stance on Middle East crises such as terrorism. Does this mean that Seoul and Far Eastern countries see themselves at a safe distance from terrorist issues?

It is truly shocking and deplorable that a countless number of innocent lives have fallen victim to the series of terrorist acts that have taken place in the Middle East and throughout the world, including in Paris late last year and more recently in Brussels and Lahore, Pakistan.

Terrorism constitutes a grave threat to peace and security of the international community, and Korea is no exception to this threat.

With an unequivocal stance that terrorist acts that indiscriminately take the lives of innocent civilians are a crime against humanity that cannot be justified under any circumstances, the Korean government has strongly denounced those acts and worked together with the international community to respond.

In the days to come, the Korean government will continue to make efforts together with the international community to deal with terrorist acts and violent extremism inciting terrorism.

What is your assessment of the importance of Iran and its position in regional diplomacy?

The Middle East is vital to maintaining global peace and security. I think that the efforts of the world, including nations in the region, for the settlement of sustainable peace in the region are very meaningful.

The region is currently faced with various political and economic challenges. As a key nation in the region, Iran can play a constructive role in addressing those problems. Even though it is difficult to directly compare Iran’s nuclear issue with Syria’s problem, Iran’s role will be important since it can play a significant role in the region.

The Korean government hopes that a political solution will be promptly arranged to address regional instability and the humanitarian crisis caused by prolonged problems in Syria. In this connection, we will join the efforts of the international community.

Would South Korea consider presuming a more active role in fighting terrorism? In this regard, how close is South Korea’s stance to Iran’s?

The Korean government has actively participated in international efforts to combat terrorism by implementing the United Nations Security Council resolutions pertaining to terrorism, strengthening humanitarian assistance to Syrian and Iraqi refugees, and reinforcing, through the United Nations, the capacity of nations vulnerable to violent extremism. We will continue such efforts in the future.

I am aware of Iranian efforts to fight and prevent violent extremism through the ‘World Against Violence and Extremism (WAVE) initiative,’ proposed by President Rouhani at the General Assembly of the United Nations in 2013.

Terrorism knows no borders, thus it cannot be addressed by the power of one nation alone. All nations should actively join the international community’s efforts to combat and prevent terrorism.

How did the global implementation of sanctions by South Korea impact commercial relations between the two countries? And how did it change the statistics of transactions?

International sanctions against Iran had a huge influence on trade relations between our two countries.

As of 2011, before the sanctions, bilateral trade totaled US$17.4 billion. However, the amount dropped to US$6.1 billion in 2015. A number of cooperative economic projects underway in Iran were suspended, and companies and businesspeople of both nations endured many difficulties.

Now the sanctions against Iran have been lifted, and Iran has returned to the international economic system. Bilateral economic cooperation is expected to recover soon to the level before the sanctions were imposed.

I hope that the two nations will closely cooperate based on the trust built so far.

In this visit to Iran, besides meeting authorities, has any negotiation with the private sector been planned as well?

I will attend the Korea-Iran Business Forum now being prepared by the Korea International Trade Association (KITA) and the Iran Chamber of Commerce, Industries, Mines and Agriculture (ICCIMA). There, I will communicate with business leaders of both countries and discuss a wide range of issues on how to promote economic cooperation in the private sector.

I hope that Iranian participants will be able to share constructive ideas on how to promote substantive bilateral cooperation with the Korean delegation of 230 business leaders accompanying me on my visit to Iran. I hope that in the process, there will be discussions on potential projects not only in the area of traditional cooperation, such as infrastructure and energy, but also in future growth engines such as IT, healthcare and the environment.

In the post-JCPOA era, which section of the Iranian market does South Korea consider as an economic target?

I hope that bilateral trade will not only recover but also diversify. In addition, I hope that we will be able to establish a close partnership to promote growth in various areas such as infrastructure and the industrial base as well as in science and technology, which are necessary to rebuild the Iranian economy.

Iran is expected to focus on improving its infrastructure in the days to come, including railways, roads, harbours, power generation and the electric grid, and water resources. I believe that since Korean businesses have taken part in various projects in Iran and proven their technology and credibility, there are good prospects for expanding bilateral cooperation.

Moreover, at present, Korea imports crude oil from Iran, and Iran imports raw and subsidiary industrial materials from Korea. There is high potential to diversify trade items between the two nations.

Considering the high level of science and technology and enthusiasm for education in Iran, there will be great synergy from mutual cooperation in new high value-added industries such as information and communications technology, health care and medicine, and new and renewable energy.

In which oil projects would Korean oil companies prefer to invest? What makes Iranian oil project more appealing than the oil projects belonging to other countries in the Middle East?

I am aware that Iran is currently pushing forward various projects for economic reconstruction in the field of energy infrastructure in general, including not only projects for gas and oil production but also shipping infrastructure, oil refining plants, and the integrated gasification combined cycle.

Korean enterprises have gained recognition from Iran for their commitment to given projects and ability to complete on time despite any hardship. On this basis of strong trust, I look forward to good cooperation in all fields related to resources and energy infrastructure development.