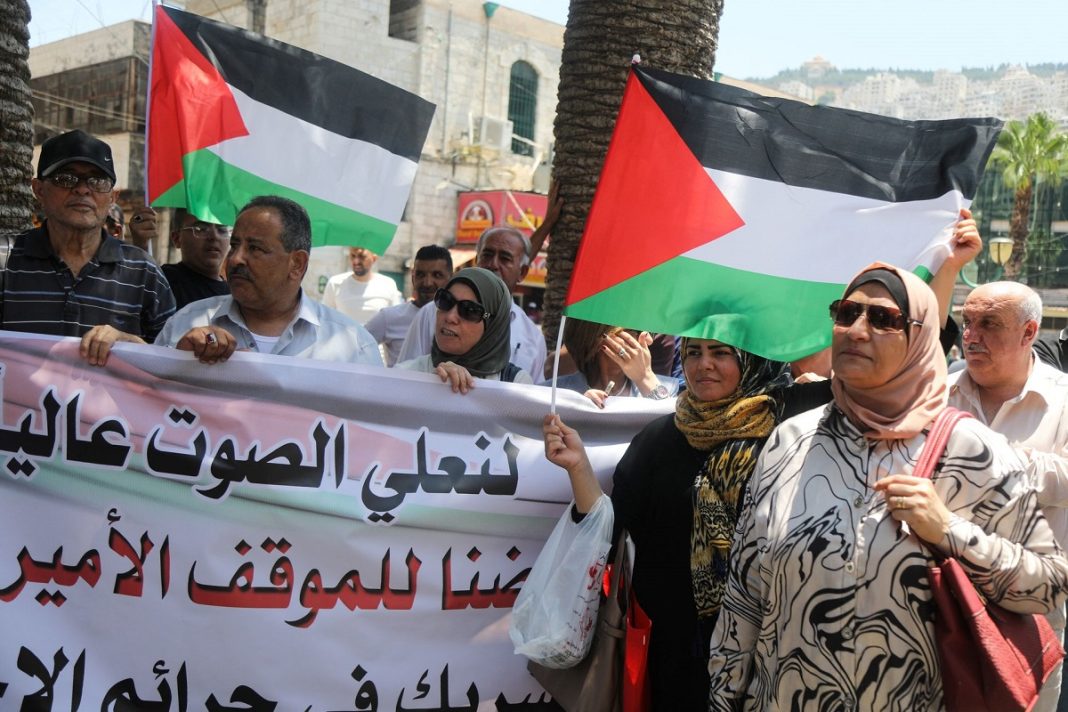 Hundreds of Palestinians have staged a demonstration in the West Bank to voice their anger over US President Joe Biden’s visit to the occupied territories on his first Middle East trip as the US president.

The protesters converged on the bustling Martyrs’ Square in Nablus, located approximately 49 kilometers (30 miles) north of al-Quds, on Thursday afternoon in a protest rally organized by the Factional Coordination Committee.

The participants chanted anti-US slogans in rejection of Biden’s visit, and censured Washington’s blatant bias in favor of the occupying Israeli regime.

Nasser Jawabreh, a senior member of the Factional Coordination Committee, said in a speech at the event that the entire Palestinian nation, political factions and institutions are opposed to the 79-year-old president’s trip as he does not shy away from voicing his full support for Israel and attempts to align US positions with the Tel Aviv regime’s interests.

He stressed that Palestinians reject all the scenarios that Biden has come up with, as they seek to choke off the Palestinian cause, deprive Palestinians of their right to return and self-determination, and legitimize illegal settlements.

Separately, Bassem Na’aim, a member of the political bureau of Hamas resistance movement, said at a seminar in Gaza City that Biden came to the region laden with “failure.”

“The US president has no solution to the Palestinian-Israeli conflict,” Na’aim added, stressing the “need to hold a strategic dialogue at the level of Arab and Islamic parties, countries and entities.”

Ahmad Al-Medallal, a member of the Islamic Jihad resistance movement, underscored that Palestinians should not bet on “the US project in the region.”

“The Palestinian leadership has to form a national front to manage the state of conflict with Israel,” he said.

Maher Mezher, a leader of the Popular Front for the Liberation of Palestine (PFLP), also noted that Biden’s visit aims to strengthen the US grip on the region, warning against false promises by Washington.

Meanwhile, the head of the political bureau of Hamas slammed in a statement Washington’s and Tel Aviv’s efforts to strike a coalition in the Middle East region.

“The US government’s attempts to redesign the region based on the integration of the occupying regime, and to ensure its security through an alliance with some Arab governments will fail as such steps run contradictory to the popular wills of the Muslim world in addition to the cultural and intellectual heritage of the region,” Ismail Haniyeh said.

Haniyeh added, “We want to start a strategic dialogue among different strata of the Muslim world, which will result in the formation of a political coalition and protection of the region against hegemony, normalization of relations [with Israel] and exploitation of resources.”

“Palestinians will no longer fall into the trap of [so-called peace] negotiations since the talks tend to strike the core of the Palestinian cause. Our option is to continue the comprehensive resistance until occupiers are expelled from Palestinian lands and Palestinians return to their homeland and the holy city of al-Quds,” the Hamas leader pointed out.

Furthermore, Muhammad al-Hindi, a senior member of Islamic Jihad resistance movement, downplayed Biden’s visit to the Middle East region, stating that the trip is chiefly focused on reorientation of US relations with the oil-rich Arab nation.

Hindi highlighted that no new development regarding the Palestinian issue and the situation of al-Quds is expected to take place during the trip, warning the Palestinian Authority officials against returning to the negotiating table.

“The US government provides the Israeli regime with financial aid, weapons and political support, and only gives the Ramallah-based Palestinian officials hollow promises,” the senior Islamic Jihad official pointed out.

Hindi also added it was too soon to talk about a new alliance in the Arab world similar to NATO, stating that the member states of such an alliance must have common challenges and goals.

The top Islamic Jihad member concluded that the main purpose of Biden’s trip is to secure energy resources for the West, and to announce that America will not leave the Middle East.

Biden arrived on Wednesday in the Israeli-occupied Palestinian territories, where he has already met Israeli leaders including caretaker prime minister Yair Lapid and will talk with opposition leader Benjamin Netanyahu, among others.

On Friday, Biden will visit occupied East al-Quds and the occupied West Bank city of Bethlehem where he will hold talks with Palestinian Authority (PA) President Mahmoud Abbas, before flying to Saudi Arabia.