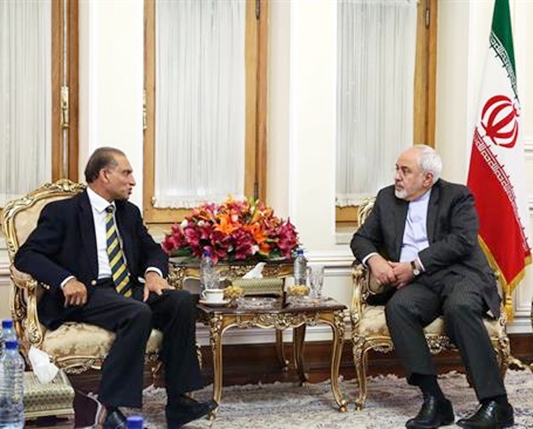 Iranian Foreign Minister Mohammad Javad Zarif says there is no obstacle in the way of the expansion of banking relations between Iran and Pakistan.

In a meeting with Pakistani Foreign Secretary Aizaz Ahmad Chaudhry in Tehran on Saturday, the Iranian minister added that enhanced economic ties between the two countries hinge on boosting banking cooperation.

“Pakistani banks are capable of speeding up their cooperation without any concern,” Zarif said.

He pointed to good relations between Tehran and Islamabad and urged the two sides to further strengthen their cooperation in all sectors, particularly in economy.

The Iranian minister further stressed the importance of fighting terrorism and extremism and said Daesh and al-Qaeda terrorist groups are common threats to the two countries.

The Iranian minister’s remarks came as the United States and the European Union continue with some acts of obstructionism in the implementation of last year’s nuclear agreement, known as the Joint Comprehensive Plan of Action (JCPOA), clinched between Iran and six global powers.

The nuclear deal envisages Tehran scaling back its nuclear program in return for the lifting of all nuclear-related sanctions on the Islamic Republic.

However, months after the agreement went into effect on January 16, the US and the European Union continue to maintain some sanctions on Iran, scaring off companies from resuming trade with the country.

Iran has stressed that developing ties with its neighbouring countries are among its priorities.

Chaudhry, for his part, said Tehran and Islamabad are improving their relations in all sectors.

He added that Pakistani firms are keen to cooperate with Iran and noted that his country attaches great importance to bolstering economic ties with the Islamic Republic.