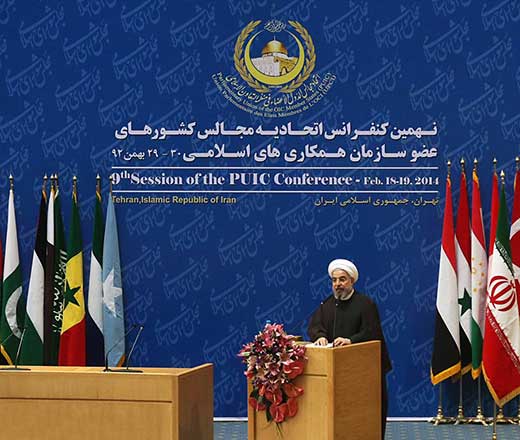 An inter-parliamentary troika meeting, attended by the former, current, and future chairmen of the Parliamentary Union of Islamic Countries (PUIC), opened in Tehran on Tuesday.

The agenda of the one-day meeting was to discuss the occupying regime of Israel’s ongoing offensive against the Gaza Strip and study ways to defend the rights of the Palestinians.

Addressing the opening, PUIC Secretary General Mahmoud Erol Kilic pointed to the massacre of the defenseless children and women in Gaza, and said, “Women and children are the main victims of these attacks and the Muslim Ummah should pay prime attention to the Palestinian cause as its main agenda.”
He noted that 19 lawmakers and seven parliament speakers were attending the meeting, showing the importance of the event. He urged the meeting to think of ways to put an immediate end to the massacre of the Gazans by the occupying regime of Israel.
Parliament speakers from Mali, Palestine, Syria, Qatar, Turkey and Sudan along with three parliamentary delegations from Oman, Lebanon and Pakistan attended the event.
Iran’s Parliament Speaker Ali Larijani as the former chairman of the PUIC, Speaker of the National Assembly of the Republic of Mali Issaka Sidibé as the current PUIC chairman, and Sudanese Parliament Speaker Fateh Ezzedin Mansour as the next PUIC chairman were in the meeting.
Larijani hailed regional resistance groups for their achievements in the fight against the Zionist regime, saying resistance is now creating a new Middle East.
“Today, it is the power of the resistance which is creating a new Middle East and the U.S. and its affiliates don’t want to recognize this power but try to undermine the current by accusing it of terrorism,” he said.
The speaker said resistance groups such as Hezbollah, Hamas and Islamic Jihad have proved their efficiency in confronting the Zionist regime. “This resistance is like a medal on the chest of the Muslims; compromise will not produce any result.”
He called on the PUIC to use its power to support the Palestinian people and asked the Egyptian government to open the Rafah border crossing for humanitarian and medical aid to the Gaza people.
Earlier on the day, President Hassan Rouhani expressed grave concern over the plight of the Palestinian people in the Gaza Strip and called on the international community not to remain silent toward the massacre of women and children by the occupying regime of Israel.
The siege of the Gaza Strip has deprived the Palestinians of food and medical supplies, President Rouhani said.
“If we remain indifferent to the plight of others, we will have no right to expect them to commiserate with us in our own plights,” Rouhani added.
The president said, “The human society should come to the understanding that we all share a common fate.”
He also commented on the major problems in the region and the world like the spread of terrorism, stressing that all countries need to contribute to tackling such challenges.