Muslim Countries Need to Strengthen Each Other: Ayatollah Khamenei 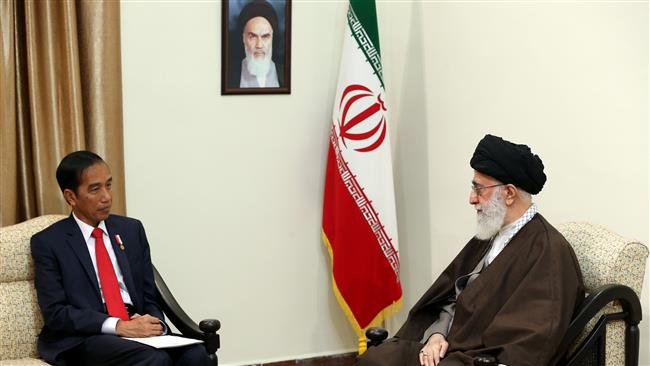 Leader of the Islamic Revolution Ayatollah Seyyed Ali Khamenei has called on Muslim countries to strengthen each other much to the dismay of their enemies.

“We believe that Muslim countries should reinforce each other and avoid division against the wishes of enemies,” Ayatollah Khamenei said in a meeting with Indonesian President Joko Widodo in Tehran on Wednesday.

The Leader of the Islamic Revolution complained that the low level of economic exchanges between Iran and Indonesia was not proportionate to the great potential of the two countries and emphasized, “By determining [clear-cut] time intervals, the volume of [bilateral] economic exchanges must increase to such figures as 20 billion dollars [a year].”

Elsewhere in his remarks, Ayatollah Khamenei said the ongoing conflicts in the West Asia region were imposed from outside on the basis of external evil goals.

Praising the positions adopted by Indonesia on the issue of Palestine, the Leader said, “Many of these crises have been created with the goal of causing the most difficult crisis in the region and the most important issue of the Islamic world, i.e. [the issue of] Palestine, to be forgotten while this issue must not be allowed to be forgotten.”

The Leader of the Islamic Revolution said, “Today, the political positions of Indonesia and the Islamic Republic of Iran in international bodies are close to each other.”

During the meeting, which was also attended by Iranian President Hassan Rouhani, the Indonesian president expressed the interest of his fellow countrymen in the Islamic Republic of Iran while mentioning expansion of economic relations, especially in the field of energy, as the main goal of his Tehran visit.