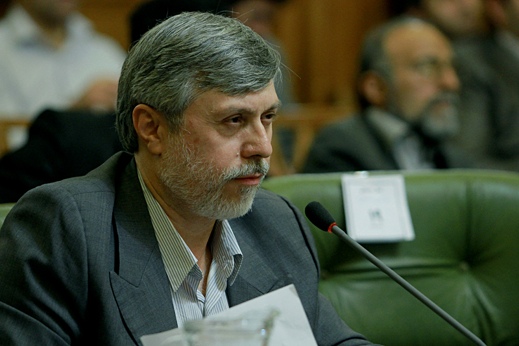 A member of Tehran City Council has criticized the Municipality’s Basij Unit for what he says is undermining the government and nuclear negotiators. The following is a partial translation of Mohsen Sarkhou’s remarks as reported by the Iranian Labor News Agency (ILNA) on February 16:

He said distribution by Tehran Municipality’s Basij Unit of placards during the February 11 rallies [marking the Islamic Revolution’s victory] – which read “A shameful agreement brings disgrace on the nation” – was aimed at weakening the government and Iran’s nuclear negotiating team, adding the municipality’s budget doesn’t allow for financing such measures.

He said there’s no doubt that the US has always shown animosity toward the Iranian nation, but such issues shouldn’t be used as a pretext to weaken the government and its negotiating team.

Such measures are against the Supreme Leader’s viewpoints, and the municipality’s budget shouldn’t be wasted, he said.

Insulting the government runs counter to the principles of the Islamic Republic, national interests and the Leader’s viewpoints, Sarkhou said, adding violators should be held accountable.

On reports that people have thanked the council for the placards, he said the thankers are likely to have been the contractors who have charged the municipality heftily for the placards.