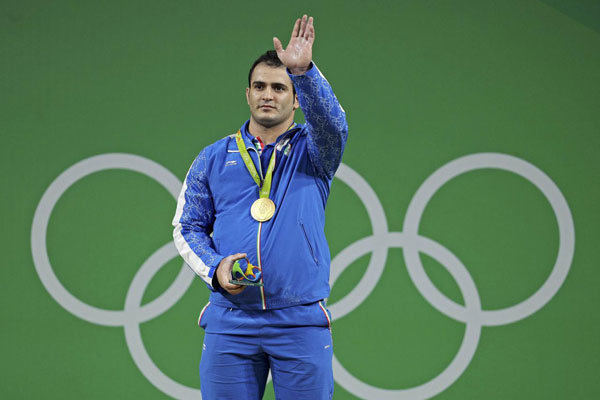 Iran had deployed two representatives to the Men’s 94 kg weightlifting encounter at Rio 2016 who lifted weights on Sunday and won a gold medal to take the country to the 21st place in overall medal standings.

Sohrab Moradi first requested 178 kilograms though he managed to lift it in the second try. Meanwhile, he fulfilled the ambition of lifting 182 kilograms in his third try only to confirm his position on top of the snatch table.

Moradi overcame the 221kg weight in his first try of clean and jerk which was enough for him to win the gold medal. The Iranian champion devoted his two remaining attempts to 231 and 233 kilogram weights in order to break the world record though he failed to do so and finished with 403 kilograms overall to stand in top of the podium.

Vadzim Straltsou of Belarus bagged silver with a total of 395 kilograms and Lithuania’s Aurimas Didzbalis claimed bronze on 392 kilograms.

Iran’s other weightlifter in the same category Ali Hashemi, who was the first Iranian weightlifter to make his attempts on Sunday, only managed to snatch 173 kilograms in his third try and lifted 210 kilograms in the clean and jerk to finish in the seventh place with a total of 383 kilograms.

Earlier on Friday, Iran’s first gold in the 2016 Olympic Games was received by weightlifter Kianoush Rostami who won the men’s 85-kilogram category with a new world record of a total of 396 kilograms.

These two golds put Iran in the 21st position in the Rio Olympics rankings between Switzerland and Sweden.