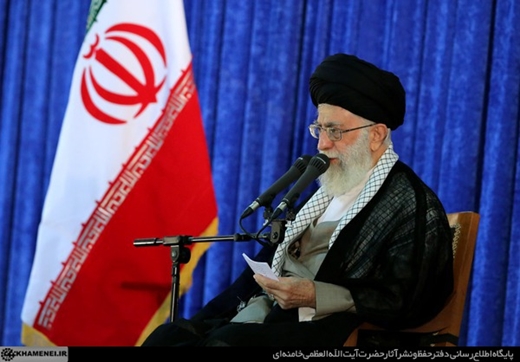 Leader of the Islamic Revolution Ayatollah Seyyed Ali Khamenei has called on Iranians to preserve their “revolutionary spirit” with which they drove the enemies out of the country some 38 years ago.

Ayatollah Khamenei addressed more than one million mourners in southern Tehran on Friday to mark the 27th anniversary of the passing away of Imam Khomeini who ended a pro-Western monarchy in Iran in 1979.

“We have still many small and big enemies, but foremost among them are America and this very evil Britain,” Ayatollah Khamenei said.

Ayatollah Khamenei said the enemies have never given up their hostility toward the Iranian nation.

The Leader criticized the global economic system, saying it is controlled mostly by Zionist elements.

Sanctions imposed on the Islamic Republic under the pretext of its nuclear program were actually aimed at crippling the Iranian nation and its economy, he said.

The “economy of resistance” is the only way for the Iranian nation to achieve economic independence, said Ayatollah Khamenei, calling on state officials to take domestic capabilities into account.

Millions of Iranians are taking part in ceremonies across the nation to mark the anniversary.

Travelling from across the country, huge numbers of mourners have converged on the mausoleum of Imam Khomeini in southern Tehran to pay their tributes.

Ali Ansari, an official in charge of organizing the ceremony at Imam Khomeini’s mausoleum, estimated that some 1.3 million people have gathered at the complex.

The Islamic Revolution of 1979, led by Imam Khomeini, forced out the enemies and became a source of inspiration for other nations, the Leader said.

Ayatollah Khamenei added that Imam Khomeini believed in God and the people, and considered himself a servant of Allah.

The Islamic Revolution took the Iranian nation out of the quagmire of dependence on foreigners, corruption and international humiliation, Ayatollah Khamenei added.

The Leader called on state officials, activists and the entire nation to preserve the revolutionary spirit.

“All Iranians must remain revolutionary because the revolution belongs to the entire nation. It should not be confined to certain groups,” the Leader said.

Ayatollah Khamenei called for commitment to the basic principles and ideals of the Islamic Revolution, saying the nation must adhere to its independence from foreigners in all areas and stay vigilant in the face of the enemy’s schemes.