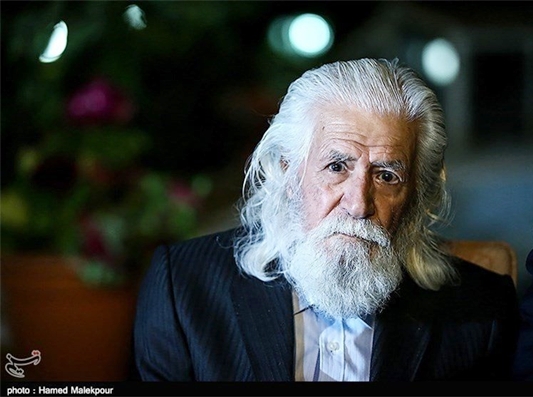 In a letter of condolence published on Saturday June 11, Ayatollah Seyyed Ali Khamenei expressed his sorrow at the death of Sabzevari and said, “This eternal and honourable name reminds us of the efforts made by the vigorous and brave artist in the field of literature and poetry to support the Islamic Revolution.”

In his message, Rouhani wrote, “The death of the prominent revolutionary poet and the eternal figure of the culture of the country, Master Hamid Sabzevari, came as a great sorrow.”

He called Sabzevari “One of the most diligent and influential figures of contemporary Persian literature, who could record the important events of the Islamic Revolution with his artistic genius and commitment to values.”

Sabzevari, who was suffering from Alzheimer’s disease, died at the age of 91 at Tehran’s Asia Hospital on Friday night.

His fans and friends gathered at Tehran’s Art Bureau on Monday to bid him farewell at his funeral ceremony. During the ceremony, Culture and Islamic Guidance Minister Ali Jannati delivered a speech.

“Hamid Sabzevari wrote poems for the Islamic Revolution; so the entire Muslim world was the audience of his poems,” Jannati said, as quoted by Mashregh and translated by IFP.

His body is planned to be transferred to Sabzevar to be buried in his hometown in Khorasan Razavi Province on Wednesday, as reported by Tehran Times.

In his last will and testament, Sabzevari asked to be interred at his childhood domicile in Sabzevar.

However, the officials of Sabzevar said that the home is too small, thus inappropriate to be used as a burial place for Sabzevari. He is therefore scheduled to be buried in the town’s Bahman Park.

Born as Hossein Aqa-Momtaheni in 1925, Sabzevari began composing poetry at the age of 14. He composed Khomeini, Oh Imam! in praise of Imam Khomeini in 1979.

He was also the composer of USA, USA, Shame on Your Deceits! and This Is the Call of Freedom from the Orient.