Larijani Calls for Effective Relations with All Countries 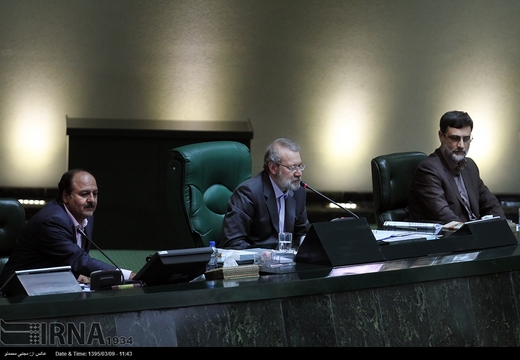 Ali Larijani, who was elected by members of Iran’s new Parliament as the temporary Speaker, called for broader ties with other countries in line with Iran’s national interests.

Addressing the Parliament after being elected as the temporary Speaker on Sunday May 29, Larijani said, “We should admit that our country is not a lonely island in the world.”

“We should have effective relations with all countries, in line with our national interests,” he went on to say.

He also noted that divisive acts by certain Middle East countries should be redirected in a way that fosters “equality” in the Muslim world.

“To do so, we need the ‘diplomatic development’ theory, and the Parliament’s National Security and Foreign Policy Commission should pay special attention to the issue,” Larijani stated.

Elsewhere in his remarks, Larijani urged the Parliamentary Research Centre to have the 10th Parliament’s strategies approved in cooperation with other MPs, so that the Majlis would be able to work in the coming four years on particular strategies.

“We are proud to have a religious democracy. This system has a powerful theoretical framework, and the more successful we are in political development […], the closer we will get to the ideal of justice and stability,” he added.

Larijani pointed to endogenous economy, the promotion of exports, and compensation for the country’s scientific backwardness, which was inherited from the time of despotic kings, as the most important issues to be addressed by the new Parliament.

Larijani, a moderate Conservative from the Qom constituency, won the Sunday votes in a race with Mohammad Reza Aref, the leading reformist figure in the new term. The former received 173 votes while the latter bagged 103.

Although Aref failed to be elected as the Speaker of the new Parliament, Massoud Pezeshkian, a reformist MP who was the Health Minister of ex-President Mohammad Khatami, became the 1st Vice-Speaker.

However, Ali Motahari, the outspoken moderate who was the second candidate of reformists for the role of Vice-Speaker, lost the election to a conservative, Mohammad Dehqan, who beat him by a difference of 4 votes to became the 2nd Vice-Speaker.

The Fars news agency quoted the reformist MP Mohammad Ali Vakili as saying that Aref will not run again for the post, meaning Larijani is almost certain to secure the position.

For further coverage of Larijani’s election as Parliament Speaker, see:

Larijani: Parliament is a Centre for Defending Nation’s Rights