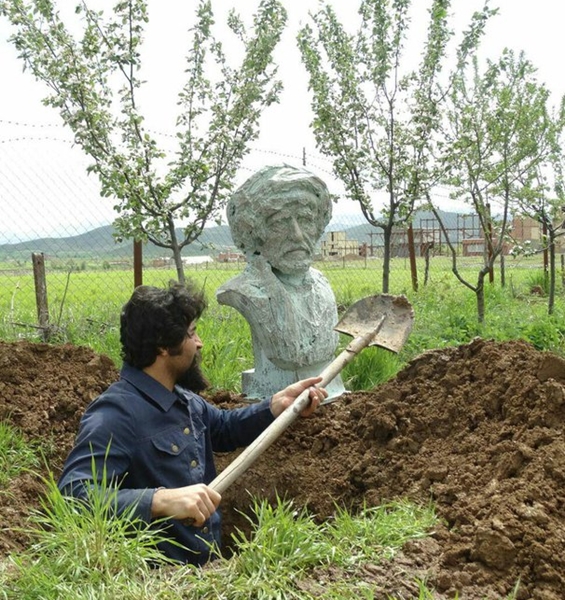 An Iranian-Kurdish sculptor buried a statue he had made of a famous Kurdish poet, after municipal officials refused to install it in the western Iranian city of Marivan.

Here is IFP’s translation of a report by ISNA.

Bashir Nasseri, the Marivan-based artist, created the sculpture of the poet “Ghaneh”, but says the city authorities do not value culture and art.

“I had been working on the statue for over two years, for it to be installed in Marivan, and I wanted to give it to the city and its people as a gift, but the city officials seemed not to care,” he told the Iranian Students’ News Agency (ISNA).

Nasseri said that the visual pollution of the city bothered him and there were lots of problems with the appearance of Marivan.

“Marivan has many artists, but I believe the municipality does not make good use of its authority, and assigns art projects to people with no expertise,” he noted.

“Such projects are built in an amateur way, without any expertise, and just make the city look ugly,” the Kurdish artist went on to say.

“The municipality and the city council were aware of the making of the sculpture. I repeatedly pursued its installation somewhere in the city, but the authorities did not respond, so I decided to give it to the soil of Marivan as a gift,” he asserted.

“I also planted a sapling on the sculpture in memory of Ghaneh,” Nasseri said.

Bashir is a graduate of painting in the Art University of Tehran. He has been working in different artistic fields, including painting and sculpture, for 20 years. Several of his statues and other artworks are already installed in different Kurdish cities, like Paveh.