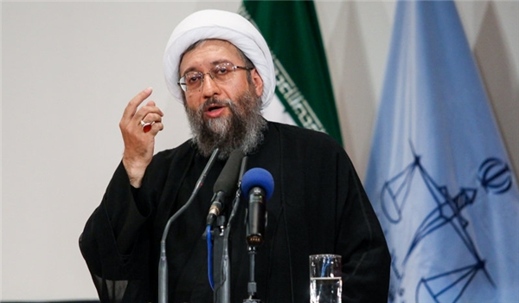 Iran's Judiciary chief has said that a big turnout in the February 11 rallies will show to the world that Iranians support the Islamic establishment and will never give up their divine goals.

He called for massive public turnout in rallies that will be held on February 11 to celebrate the anniversary of the victory of the 1979 Islamic Revolution in Iran, and said, “By their large participation in the February 11 rallies, the Iranian nation will show to the world, especially the hegemonic powers, that plots and sanctions cannot influence these people and the Iranian people bear the hardships but never give up their divine goals.”

In relevant remarks in November, President Rouhani underlined that P5+1 (the US, Russia, China, Britain and France and Germany) had come to the conclusion that sanctions and pressures cannot halt Iran’s progress in various fields, including the nuclear technology.

“There is no doubt in the continued operation of Iran’s nuclear technology and installations and today, the negotiating sides are of this belief that pressures and sanctions against Iran don’t yield any fruit,” Rouhani said in an interview with the state-run TV.

The latest round of the nuclear talks between the two sides was held at the level of deputy foreign ministers in Geneva, Switzerland, on January 18.

The two sides decided to continue their talk early in February.

Iran and P5 +1 have underlined that cutting a final deal before the July 10 deadline is possible.