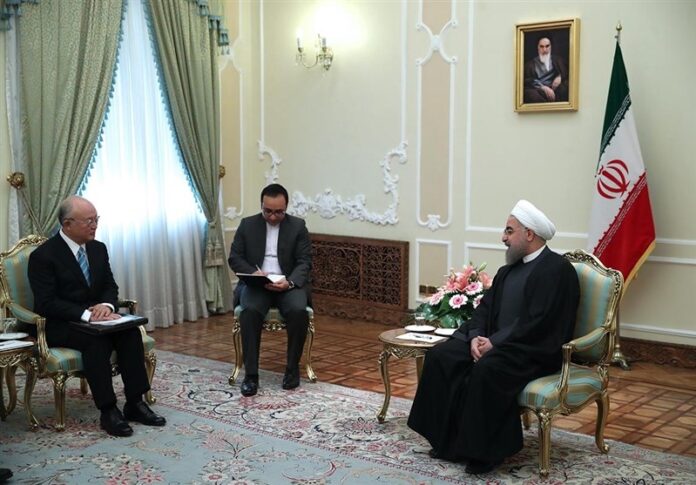 Iranian President Hassan Rouhani slammed the US extension of Iran Sanctions Act (ISA) as a violation of the JCPOA, the July 2015 nuclear deal between Tehran and world powers, saying such conducts would only erode international trust in the US administration.

“The policy the US has adopted on Iran will reduce global trust in the US government,” President Rouhani said at a meeting with Director General of the International Atomic Energy Agency (IAEA) Yukiya Amano in Tehran on Sunday.

Describing ISA as a violation of the Joint Comprehensive Plan of Action (JCPOA), a nuclear agreement between Iran and the Group 5+1 (Russia, China, the US, Britain, France and Germany), Rouhani said Iran would live up to its commitments under the deal as long as the other parties do so.

He also called on the IAEA to fulfill its duties to help the JCPOA survive. “The agency’s reports should be technical and impartial, and we expect the agency to carry out its duties in the fields of technical cooperation (with Iran), acquisition of peaceful nuclear technology and nuclear trade.”

President Rouhani then expressed the hope for close technical cooperation with the IAEA on development of nuclear propulsion systems for maritime transportation.

For his part, Amano underscored that Iran has fully honored its commitments to the JCPOA since the deal took effect in January.

The Japanese head of the UN nuclear agency also gave an assurance that the IAEA will remain an impartial agency and deal only with technical issues.

Heading a delegation, Amano arrived in Tehran on Sunday morning for a series of high-profile meetings for talks on the process of JCPOA implementation.