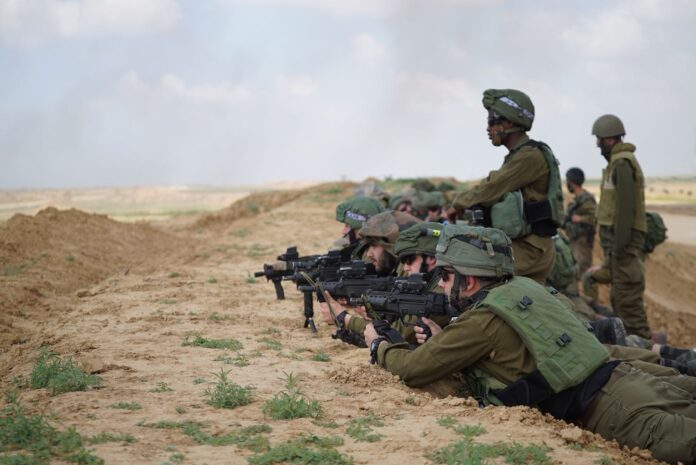 The Israeli military launched massive war games on Sunday. The week-long exercise is expected to simulate a full-scale war with Lebanon’s Hezbollah movement.

In addition to simulating a fight against Hezbollah, the drills are also meant to test how the military, emergency services and internal security forces would respond to domestic strife inside mixed Arab-Jewish cities in Israel proper.

During the May Gaza War, cities including Lod, Acre and Ramallah were engulfed in deadly clashes, which culminated in the deaths of several Palestinian protesters and two Jewish residents, caused over a thousand injuries, and led to tens of millions of dollars in property damage.

“We will test what we learned and experienced at levels I didn’t anticipate in terms of the domestic front,” IDF Home Front Command chief of Staff Brig. Gen. Itzik Bar stated Sunday, recalling May’s violence and commenting on the new drills.

“What concerns me as chief of staff of the Home Front Command: One is the issue of precision-guided munitions and the effect that they will have on our ability to function and on things in in the world of incoming fire alerts. The second is the rate of fire and Hezbollah’s ability to conduct truly massive rocket barrages at specific geographic areas – I’ll use the phrase ‘demolishing the front line’ – directed fire at the communities near the border,” the commander added.

Bar stressed the exercises would “put into practice” what he and his staff learned through a close study of May’s Gaza conflict, with the drills expected to “test how those lessons were enacted”.

The drills will include simulations of the consequences of Hezbollah firing its vast arsenal of missiles and rockets into Israel, including possible attacks, attacks striking toxic chemical storage sites inside the country, major power outages and hospitals overwhelmed with injured civilians.

Defense Ministry’s National Emergency Management Authority (NEMA) director Yoram Laredo told reporters that his agency has a document for reference “about how a multi-front war will look in terms of its scope and significance”, with the drills expected to give it “a degree of accuracy about possible events and how we direct and refine the exercise so that it can really be effective”.

He said Sunday’s drilling included a special focus on police, and simulated “nationalistic-based riots on many fronts”.

In addition to the military and NEMA, police, fire and rescue, ambulance workers and other government services are expected to be involved, carrying out simulations of the evacuation of northern populated areas, and carrying out air raid tests.

Unlike Hamas, which is concentrated in the besieged Gaza Strip, and whose fighters are forced to construct mostly simple homemade rockets out of scarce materials, Hezbollah is believed to possess over 100,000 rockets and missiles of various ranges, including precision-guided missiles. The group already demonstrated the capabilities of its rockets in the 34-day Lebanon War in 2006, when it fired nearly 4,000 of its 15,000 rocket and missile arsenal into Israel, and effectively bogged down an Israeli offensive until the United Nations brokered a ceasefire.

The Israeli military and media observers have expressed serious apprehensions about Hezbollah’s rocket and missile capabilities, given that even Hamas’s considerably weaker rocket arsenal demonstrated in May its potential to overwhelm Israel’s Iron Dome missile defense system when rockets were fired simultaneously in massed volleys.

In May, an Israeli court’s ruling to evict six Palestinian families from a neighborhood of East Jerusalem triggered public unrest which culminated in an 11-day battle between the Israeli military and Gaza-based militants led by Hamas. Nearly 300 civilians were killed in the fighting, most of them Palestinians in the Gaza Strip and the West Bank.