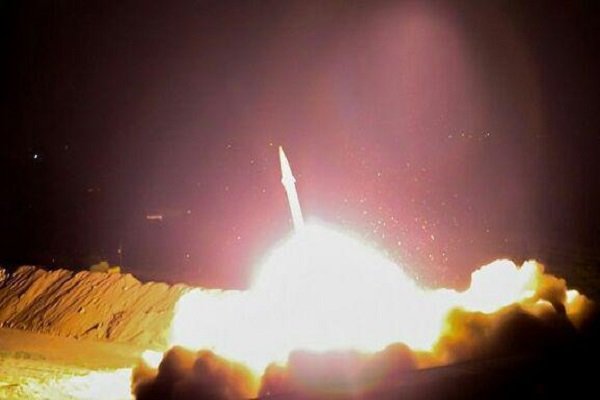 The IRGC has reportedly used at least two types of mid-range missiles, including both liquid and solid fuel ones, to target the positions of Takfiri terrorists in Syria’s Deir ez-Zor in a series of strikes launched on Sunday in retaliation for the recent Tehran attacks.

According to a report by the Fars News Agency, the Islamic Revolution Guards Corps has used both Zolfaqar (solid fuel) and Qiyam (liquid fuel) missiles in its retaliatory attacks on ISIS positions in Deir ez-Zor.

The IRGC on Sunday night fired six missiles from its bases in Iran’s Kermanshah and Kordestan provinces, all of which exactly hit the desired targets in eastern Syria, according to Brigadier General Amir-Ali Hajizadeh, the Commander of IRGC Aerospace Force.

General Hajizadeh also noted that hitting a small building from a nearly 700-km distance sends a clear message and displays Iran’s real might.

“Enemies should know that Tehran is not London or Paris; this was just a minor attack, and if they do anything wrong, they will receive more crushing responses,” he added, referring to the recent terrorist attacks on Tehran, which were avenged by the missile attacks.

The IRGC monitored the way its missiles hit the desired targets in Syria through a number of drones flown from Damascus, General Hajizadeh added.

His remarks came as Head of the IRGC Public Relations Department General Ramezan Sharif also announced the missile attacks had been coordinated with Syria’s government.

Speaking to the Tasnim News Agency, General Sharif said that during the operation codenamed “Laylat al-Qadr” the IRGC fired six mid-range ballistic missiles at various targets, within a range of 650 to 700 kilometres.

The strong missiles successfully hit the targets with pinpoint accuracy, he said, adding that the headquarters, ammunition and logistic depots of the terrorists were among the targets in the operation.

“The firing of these missiles had previously been coordinated with Syria and the missiles entered the Syrian airspace through Iraq,” the commander noted.