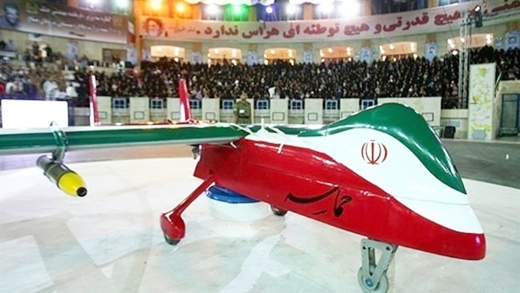 The maneuvers, codenamed The Great Prophet (PBUH), started out in Sistan-and-Baluchestan Province on Tuesday. The area covered by the drills was being monitored by 10 reconnaissance unmanned aerial vehicles.

The aircraft included Hamasseh (Epic), which was being deployed as part of military maneuvers for the first time since being unveiled two years ago. The drone is capable of carrying out surveillance, reconnaissance, and strike missions simultaneously and can do long flights at high altitude.

It was being flown together with the IRGC’s Mohajer (Migrant), Ababil, Shahed (Observer) drones.

Commander of the IRGC’s Ground Forces Brigadier General Mohammad Pakpour had said on Sunday that the three-day drills would also cover the provinces of Kerman, South Khorasan, and Hormozgan from April 12 through April 14.

He added that maintaining the preparedness of the IRGC forces, displaying the Iranian Armed Forces’ might, improving the security of the region, and implementing certain tactics are among the objectives of the maneuvers.

Iran has conducted a number of drills to enhance the defense capabilities of its Armed Forces and to test modern military tactics and equipment.

The IRGC successfully test-fired two ballistic missiles on March 9 as part of military drills to assess its capabilities. The missiles, dubbed Qadr-H and Qadr-F, were fired during large-scale drills code-named Eqtedar-e-Velayat.