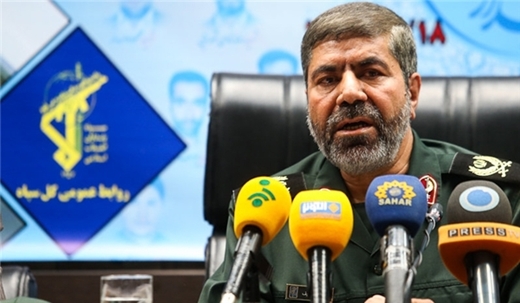 Head of the Islamic Revolution Guards Corps (IRGC) Public Relations Department General Ramezan Sharif announced on Wednesday May 18 that a growing number of Iranians have volunteered to be dispatched to Syria for the war against terrorism.

“Today, we are facing a growing wave of demands to be sent to Syria and Iraq, and many young people from different parts of Iran and of different ethnicities have volunteered,” Ramezan Sharif said.

He also warned of enemy plots to hit Iran through terrorist groups, including ISIS and al-Qaeda, but underlined, “The Iranian Armed Forces have grown so powerful that the enemy doesn’t dare to make the slightest aggressive move against the country.”

“This is not a slogan; it is an undeniable reality,” Ramezan Sharif stressed.

Iran has pioneered in helping regional states fight terrorism, especially Iraq and Syria, and has demanded regional and world states to partner it in the war on terrorist groups.

“Since the start of the conflict in Syria, the Islamic Republic of Iran’s Armed Forces voiced readiness for (overseas) deployment and pressured their commanders to be dispatched to the region,” General Moussavi said.

He said Supreme Leader of the Islamic Revolution and Commander-in-Chief Ayatollah Seyed Ali Khamenei was then informed of the Iranian military men’s preparedness and interest, and the Leader agreed to dispatch a number of advisors.

General Moussavi underlined that the dispatch of military advisors to Syria is done fully voluntarily, and said, “This will continue as long as necessary.”