IRGC Navy Commander: US Incapable of Waging War on Iran 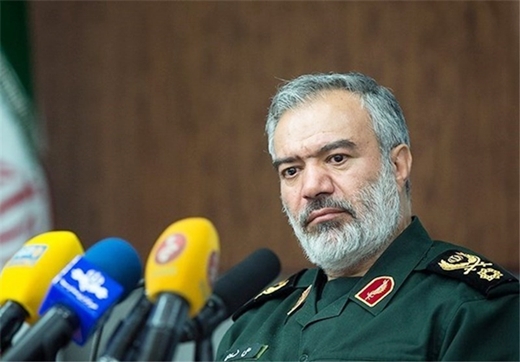 Commander of the Islamic Revolution Guards Corps (IRGC) Navy Rear Admiral Ali Fadavi referred to the presence of tens of US navy ships in the Persian Gulf, and stressed that they lack the capability to threaten Iran.

Speaking in a ceremony held on Sunday in Yazd, Fadavi said the hostility of the US and other hegemonic powers towards Iran is constantly increasing, but that they know that the disadvantages of any move against Iran would outweigh any advantages.

Iran and Iraq signed a ceasefire in the 1980s and established peaceful borders between two countries. Despite this, US warships have remained active in the Persian Gulf, even though no bullet has been fired, General Fadavi stated.

“That was because the Americans believe in Iran’s power of deterrence, and do not have the capability to attack Iran militarily,” he added, as reported by Tasnim and translated by IFP.

“This deterrent power means that if they make any move against Iran, it would be more harmful than beneficial for them,” he added.

“Americans say the entire world should obey them because they are the most powerful, and this is happening in reality: many countries do not even dare to express rhetorical opposition to the US,” he continued.

“Currently, 50 American warships are in the Persian Gulf, and this number increases to 63 if we take into account the warships of its allies,” he said.

However, Fadavi emphasized, Iran does not consider them powerful at all.