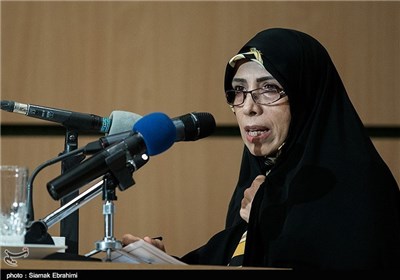 Aminzadeh on Wednesday stressed that the violent terrorist groups in the region cannot survive without receiving aid from certain countries, and called for an end to the financial aid provided for these groups by the governments supporting them.

“The financial transactions carried out by certain governments for these groups should be stopped as soon as possible,” she said in an address to the International Conference on World without Violence in Imam Khomeini’s View in Tehran.

Some rich countries today are helping racist extremist groups stream from Europe, Africa, and elsewhere into the region, she added, reiterating that the aid should be cut immediately.

In similar remarks in December last year, Iran’s President Hassan Rouhani called for a halt to the financial supports certain countries have been giving to the terrorist groups in the Middle East region.

“The countries that supported the terrorists should immediately stop funding them and disown them,” President Rouhani said at the inaugural of an international conference on ‘World Against Violence and Extremism’ (WAVE), held in Tehran at the time.

Wave Act asks the UN member states to unite against extremism, violence and sectarian conflicts in all their forms.