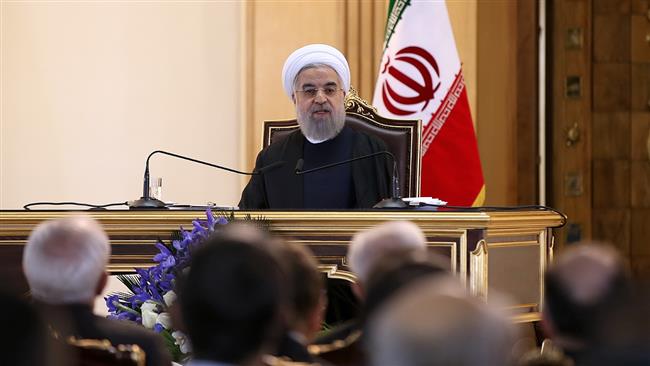 Iranian President Hassan Rouhani has called for further friendly ties with neighboring countries and all the nations across the globe.

Rouhani made the comments during a meeting with ambassadors and heads of political missions in Tehran on the eve of the 37th anniversary of the Islamic Revolution on Wednesday.

“Following the JCPOA and the removal of sanctions, our goal is friendly ties with countries in the region and all over the globe. Iran is ready to cooperate with friendly countries in the fields of economics, science, and technology to establish a common market,” he said.

Noting that Iran’s geographical location in the region can make it the cheapest route connecting the West to the East and provide access to open seas, he said, “Ties with Iran would be beneficial to the world economy and global trade.”

When the JCPOA went into effect, all nuclear-related sanctions imposed on Iran by the European Union, the UN Security Council, and the US were lifted. Iran in return has put some limitations on its nuclear activities. The nuclear agreement was signed on July 14, 2015, following two and a half years of intensive talks.