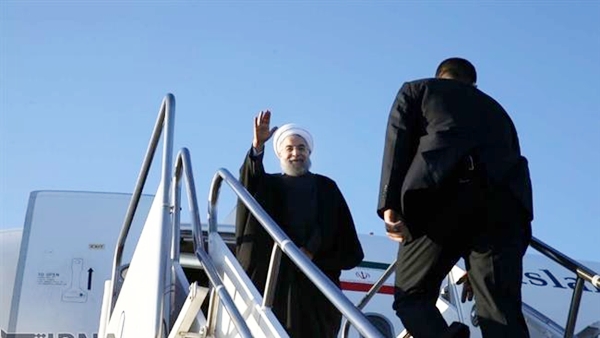 Iran’s President Hassan Rouhani has left for Italy on the first leg of his trip to three European destinations following the implementation of a nuclear agreement between Iran and six world powers.

Rouhani left Tehran early on Monday at the head of a high-ranking delegation, which includes government officials, Iranian entrepreneurs and businessmen.

In his visit to Rome, Rouhani is scheduled to meet with Italian President Sergio Mattarella and Prime Minister Matteo Renzi. Rouhani will also pay his first visit to the Vatican to meet Pope Francis.

On Wednesday, the Iranian president will travel to Paris, where he is expected to meet with his French counterpart Francois Hollande.

Prior to his departure, the president told reporters that the trip comes at a historic juncture as it follows the implementation of the nuclear agreement between Tehran and the P5+1 group of countries as well as the lifting of the sanctions against Iran.

The president said key documents will be signed during his four-day trip, which will set out a roadmap for mid- and long-term cooperation with Rome and Paris. Rouhani also said a whole range of topics, including investment, technology, transportation, exports insurance, agriculture, and tourism, will be discussed during his trip.