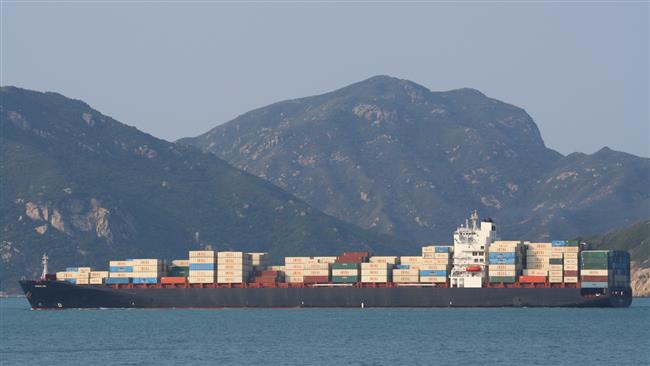 An Iranian container ship is heading to Europe for the first time in five years, marking Tehran's return to international markets after the lifting of sanctions, an official says.

Chairman of the Islamic Republic of Iran Shipping Lines (IRISL) Mohammad Saeidi said he expects the ship, carrying a cargo of petrochemical products, to call at European ports in the “next few days.”

“This is a big event as we managed to revive shipping to Europe after five years, thanks to the efforts of our management and staff, and unlock the sea transportation lock to Europe,” he said, quoted by the Mehr news agency.

“Fortunately, with the lifting of sanctions and implementation of the JCPOA (nuclear agreement) over the past five months…we managed to reopen the sea link and shipping routes to Europe,” he added.

IRISL has successfully lobbied with Germany and Italy to establish a joint shipping company to cover northern and southern Europe with their services, Saeidi added.

“Furthermore, we are working out plans for Central and North American ports with the centrality of Canada and hope to accomplish this important task after the lifting of sanctions by the Canadian government.”

IRISL’s current fleet includes 160 container vessels, dry bulk carriers and tankers ships with a capacity of over 5 million TEUs, which the company plans to expand. In October, IRISL said it was seeking to expand its fleet of container ships by 579,000 TEUs by 2020.

Saeidi said negotiations were underway with both foreign and domestic yards. The official has said his company wanted to put out orders for Triple E vessels which can carry more than 18,000 containers.

Iran’s biggest operator has 41 container ships of up to 14,000 containers, but IRISL wants to join the big league and Triple Es are a priority, he said.

Once it has built up a sufficient capacity, IRISL plans to forge an alliance with the world’s top 15 container operators which control the busiest trade routes by sharing vessels, networks and port calls.

According to Saeidi, IRISL has been touring European countries with major shipping clusters such as Greece, Germany, Cyprus, France and Denmark, to lay the groundwork.

International shipping lines have stepped up port calls to Iran as the country’s massive maritime trade sector is emerging from the sanctions.