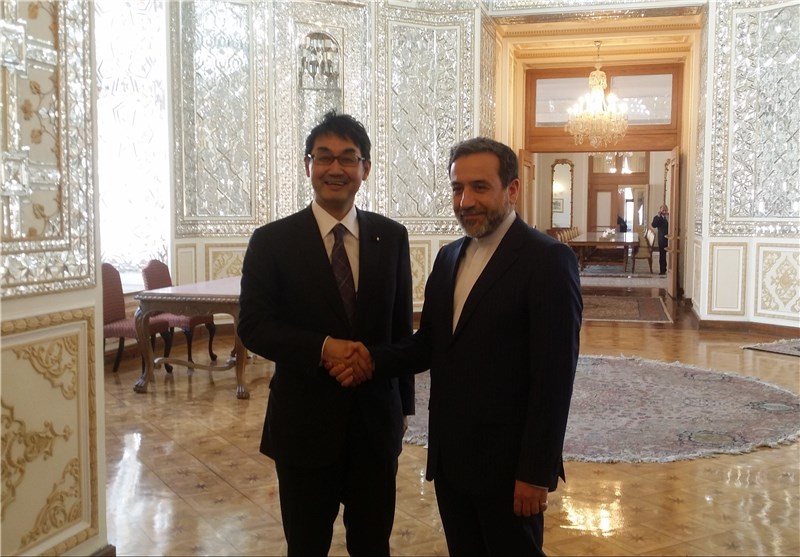 In a meeting with Katsuyuki Kawai, a senior adviser to the Japanese premier, Araqchi underlined the need for enhanced ties between Tehran and Tokyo after the implementation of a nuclear deal between Tehran and world powers (known as the JCPOA) , which took effect in mid-January.

The Iranian official further called on Japan’s companies to play a more active role in the Iranian market after the termination of anti-Iran sanctions.

Elsewhere, Araqchi welcomed a prospective visit by Japanese Prime Minister Shinzo Abe to Tehran, and appreciated Tokyo’s cooperation in the course of nuclear negotiations between Iran and world powers that led to the finalization of the JCPOA.

He also referred to the experience of JCPOA implementation, which was achieved through a win-win approach, as an achievement for the region and the international community, and a successful model for resolution of regional and even global problems.

Kawai, for his part, said his visit to Tehran is aimed at finding ways to develop Tehran-Tokyo cooperation after the JCPOA implementation and before the Japanese PM’s trip to Iran.

The two sides in this meeting also conferred on the expansion of mutual cooperation in such fields as energy, transport, and nuclear energy.

During his Iran visit, the Japanese adviser has held several meetings with Iranian officials including the Central Bank of Iran (CBI) Governor Valiollah Seif and Culture Minister Ali Jannati.

In his meeting with CBI chief, Kawai highlighted Japanese banks’ enthusiasm for stronger presence in Iran, and demanded that Tokyo receive the necessary information from Iranian banks that are willing to promote cooperation with Japanese ones.

For his part, Seif hailed Japan as Iran’s “big economic partner in East Asia”, saying the ground is set for the expansion of trade ties between the two countries.