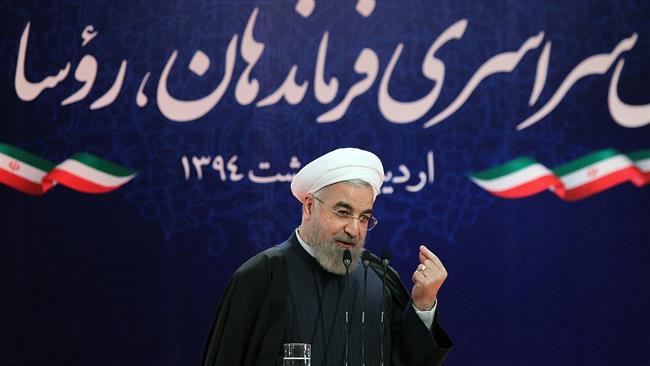 President Rouhani has said that Iranians are equal before the law, adding all people, foreign tourists included, are protected by police and the law.

Iranian President Hassan Rouhani says the country’s dependence on oil revenues will drop to its lowest level ever in the current Iranian year (which began on March 21).

Addressing commanders of police and security forces in Tehran on Saturday, Rouhani said that his administration succeeded in fulfilling its commitments over the past two years despite financial problems caused as a result of sanctions imposed on the country over its nuclear program and a slash in oil prices.

He added that some neighboring countries have hatched a plot to reduce oil prices, but their move has backfired on them.

The Iranian president noted that his administration has also managed to increase the budget for the country’s development over the past two years.

Oil prices have nearly halved since the summer of 2014, and currently stand slightly above 60 dollars per barrel.

Rouhani further said poverty and unemployment are major causes of insecurity in society and called for eradicating them.

He added that all Iranian citizens are equal before the law, saying, “Civil rights are the same for all. All are Iranians and equal to the law.”

Rouhani emphasized that all those who are residing in Iran, including tourists, enjoy safety thanks to efforts by the Iranian police personnel.

He called on the police to cooperate with the administration in achieving economic prosperity and progress.

The president went on to say that it is not the police’s responsibility to enforce Islam, but that the force should implement the law. Otherwise, police will get mired in mental trouble and will entangle people in trouble too, the president added.

In comments aimed at police officials, the president said, “Try to see all people as equals and treat them equally in order to raise you favorability in society. This can also earn you divine consent and public satisfaction”.