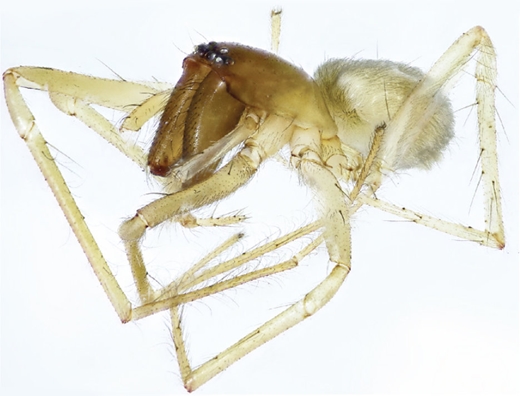 In a recent study by Iranian Alireza Zamani, Russian Yuri M. Marusik and American James W. Berry, arachnologists, a new species of intertidal spider has been discovered on the shores of the Persian Gulf and the Gulf of Oman in Iran, and named as Paratheuma Enigmatica, due to its quite unexpected, enigmatic distribution.

Discovering the genus Paratheuma in Iran was particularly interesting. Previously, they were known to exist in Australia, USA, the West Indies, Mexico, Japan, Korea and a few islands in the Pacific Ocean. The closest reported locality of this genus is in Korea, more than 6,000 kilometers east of Iran.

As a result, this record fills a gap in the middle of the known distribution range of the genus. The distribution of P. enigmatica supports the previous observation that there is only one species per island, but one species may be found on several islands.

It seems that dispersal must have been of primary importance in the evolutional history of the Pacific Paratheuma. These spiders are of particular ecological interest as they inhabit broken coral rubble below the tideline, and feed upon intertidal crustaceans, but the ecology and full distribution range of this particular rare species remains unknown. The study’s findings were published in a recent issue of Zoology in the Middle East.

In order to gain a better knowledge of the spider fauna of Iran (currently comprising more than 600 species in 48 families), several surveys in various regions of the country have been recently carried out, especially by Alireza Zamani and colleagues.

Zamani told the Tehran Times that “While studying the spider fauna of the coastal and tidal zone of the Gulf of Oman and the Persian Gulf in Iran, several interesting species were found in the collected material, for example, Filistatidae.”

Zamani added that “Perhaps the most unusual finding was the occurrence of Paratheuma, a genus previously unknown around the shores of the Indian Ocean. This genus currently comprises 10 species of intertidal spiders, distributed in Australia, Hawaii, Florida, West Indies, Mexico, Japan, Korea and a few islands in the Pacific Ocean.”

The intertidal spider family Desidae, which is now moved to Dictynidae, is named thus because members live in a very unusual location – between the tides. The family has been reevaluated in recent years and now includes inland genera and species as well, such as Badumna and Phryganoporus.

Those intertidal spiders that are truly marine commonly live in barnacle shells, which they seal up with silk; this allows them to maintain an air bubble during high tide. They emerge at night to feed on various small arthropods that live in the intertidal zone.