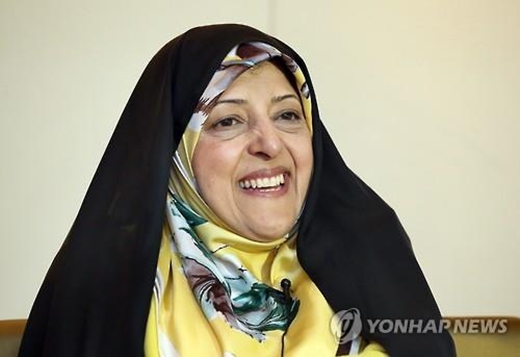 An Iranian vice president on Wednesday, May 18, called for world nuclear disarmament, the latest expression of Tehran's determination to join the international community after the lifting of sanctions.

Vice President Masoumeh Ebtekar made the call during an interview with Yonhap News Agency, saying Iran believes nuclear disarmament is a “necessity” for all countries.

“So we believe in the disarmament issue for all countries, and it should be seen in a just and equitable manner with no double standards.”

Iran has often been cited as an example for North Korea to follow after Tehran struck a landmark nuclear agreement with the US and five other world powers last year. Under the deal, Iran agreed to curb its disputed nuclear program in exchange for the lifting of crippling economic sanctions against the country.

North Korea has come under stronger sanctions from both the UN and individual nations following its nuclear and missile tests earlier this year.

Ebtekar, who also heads Iran’s Department of Environment, was keen to highlight the wider impact the sanctions had on her country.

“The sanctions were detrimental for our economy, yes, but we survived,” she said. “We managed to develop a resilient economy and to survive, but the environment was really under pressure during the sanctions.”

With the sanctions in place, Iran had limited access to the technologies it needed to curb air pollution and upgrade the standards of its refineries, according to Ebtekar.

“Those sanctions were adversely affecting not only our environment but the global environment,” she said, declining to comment directly on the sanctions on North Korea. “I think our example is very clear in itself.”

The vice president is the first high-ranking Iranian government official to visit Seoul since President Park Geun-hye made a state visit to the Islamic Republic earlier this month.

Park’s visit was a “milestone” in the two countries’ relationship, according to Ebtekar, as the two sides seek to expand cooperation from trade and investment to the environment, culture and tourism.

As a growing number of South Korean firms push to make inroads into the emerging Iranian market, the vice president called for close attention to environmental standards, saying it is a priority of her government to guard against the adverse health effects of pollution in the air, water and soil.

Ebtekar was first appointed vice president of Iran in 1997, becoming the first female Iranian to hold the post. During her three-day visit to Seoul, she has attended the Asian Leadership Conference, signed a memorandum of understanding with South Korea’s environment ministry and met with Park.