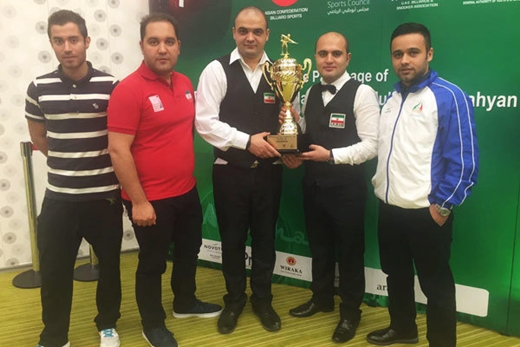 Going into the match, the Indian pair of Pankaj Advani and Aditya Mehta were firm favourites against semi-professionals Amir Sarkhosh and Soheil Vahedi.
The title clash saw the lead change hands with every frame. Each frame also saw many winners not being converted. Vahedi was the difference-maker in the final, which was an edge-of-the-seat-thriller.
“This was one final which I was not going to lose,” Vahedi told the Khaleej Times, holding the trophy.
Iran started off well, with Sarkhosh playing Mehta. It was an even contest that set the tone for the rest of the game. Mehta used all his experience to hold his nerve for a 65-53 win. In the second frame, Vahedi bundled up 6-red snooker world number one Advani 54-7. In the third, the doubles games saw all the four men on the table. And this saw Vahedi looming large over the Indian pair to single-handedly secure a 77-1 win.
With 2-1 Iran advantage, the fourth frame saw an enticing contest between Advani and Sarkhosh. With all red balls in, the two took 10 testing shots to pot the yellow. Sarkhosh had an opportunity to kill the game while leading 64-51, but missed an easy brown. Advani jumped on the opportunity to seal the fourth frame.
In the decider, Mehta started off well but a confident Vahedi never offered an inch. Mehta could have turned it around but he missed an easy brown while trailing 40-69. Thereafter, Vahedi went on to close the match.
“It was an honour to play against Advani, the world champion. I played him once last year in Malaysia when he won on the last black,” Vahedi said.
On his partner having an off day, he said: “Yes, Sarkhosh could have killed the game earlier, but we still won. To win the title is a very good feeling.”