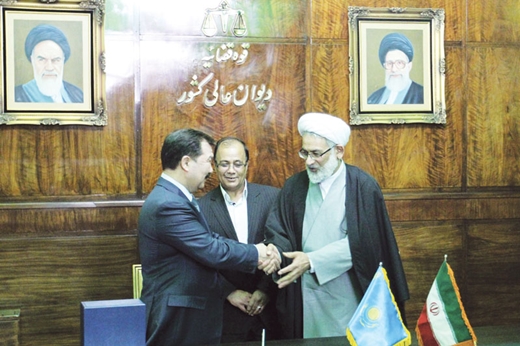 Prosecutor Montazeri underlined necessity of expansion relations and legal, judicial cooperation between the two countries.
Montazeri said that terrorism is one of the major concerns of the world community and unfortunately some of the big powers are supporting them.
He said that Iran supports international peace and security in the region and that Iran is ready to offer assistance to Kazakhstan in campaign against drug-trafficking.
Montazeri said that fight against drug trafficking needs collective cooperation of the international community.
Daulbayev expressed pleasure with his visit to Iran and appreciated Iranian hospitality.
He congratulated Montazeri for his appointment to the post and said that relations between the two countries have always been upon mutual respect.
He welcomed expansion of legal, judicial relations between Iran and Kazakhstan and said that the aim of signing legal and judicial agreement was improving justice affairs and facilitating the legal issues of the people living in the two countries.
He called for using Iranian experience in the field of fight against terrorism and extremism.
Daulbayev also called for more cooperation with Iran in the field of fight against drug trafficking at international level, saying that his office is ready to exchange views with Iranian justice officials and use Iranian legal experience to address the justice issues.