Iranian FM Meets US and British Counterparts in Vienna 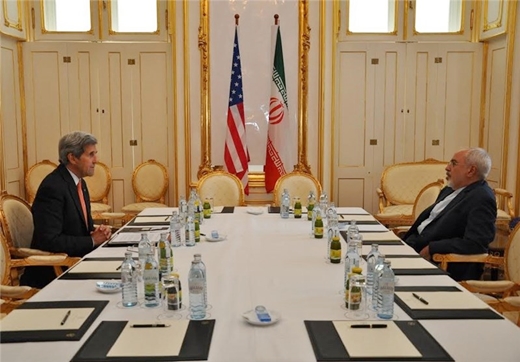 Iranian Foreign Minister Mohammad Javad Zarif held meetings with a number of his counterparts, including US Secretary of State John Kerry and British Foreign Secretary Philip Hammond, on the sidelines of a meeting of the International Syria Support Group (ISSG) in Vienna.

The 17-nation ISSG convened in Vienna on Tuesday to discuss the latest developments in war-torn Syria and look for ways for a sustainable ceasefire in the Arab country.

On the sidelines of the gathering, the Iranian foreign minister had a meeting with his American counterpart to discuss the ways to effectually implement the Joint Comprehensive Plan of Action (JCPOA), a lasting nuclear deal between Tehran and the Group 5+1 (Russia, China, the US, Britain, France and Germany).

In a separate meeting, Zarif and Hammond also met to talk about Tehran-London bilateral relations and about better ways of carrying out the JCPOA, particularly in the field of international banking ties with Iran after the termination of the sanctions.

In addition to the two meetings, the top Iranian diplomat also sat down with Oman’s Foreign Minister Yusuf bin Alawi. They held consultations on bilateral ties and regional developments.

During the meeting, Schmid gave a report on the European Union’s efforts to facilitate trade with Iran under the JCPOA.

Back in March, Leader of the Islamic Revolution Ayatollah Seyyed Ali Khamenei said Americans have yet to fulfill what they were supposed to do as per the nuclear deal.