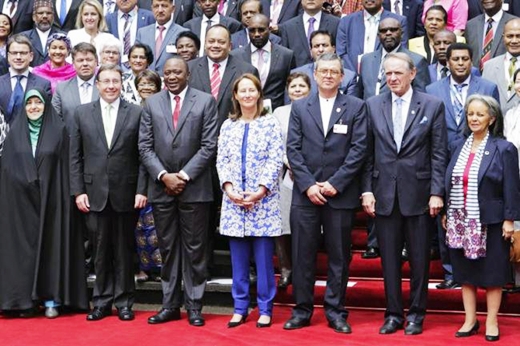 The meeting took place on the sidelines of the second United Nations Environment Assembly (UNEA-2), which was held on May 23-27 in Kenya, the DOE website reported.

Mentioning Hamoun Lake as a biosphere reserve registered by UNESCO, DoE chief Masoumeh Ebtekar called for bilateral cooperation to save and revive the lake.

She additionally suggested the formation of a working group in order to boost environmental cooperation between the two nations.

The Afghan official, Mustafa Zaher, for his part, welcomed Ebtekar’s suggestion, highlighting Afghanistan’s readiness to cooperate with Iran, saying that they are willing to sign an agreement on the matter.

Hamoun is a shallow, marshy wetland, located in the Sistan region of eastern Iran and western Afghanistan. It is fed by the Helmand River, which starts in the Hindu Kush Mountains in Afghanistan.

When droughts occur in Afghanistan, or the water in watersheds that support the lake is drawn off by natural or human causes, the end result is a dry lake bed in Iran. In addition, when the lake is dry, seasonal winds stir up fine sand and dust from the exposed lake bed.

The sand is pushed into huge dunes, which could cover a hundred or more fishing villages along the former lake shore. Wildlife around the lake has been negatively impacted and fisheries have been brought to a halt. Changes in water policies and substantial rains in the region are needed to revive the environment of Hamoun Lake.