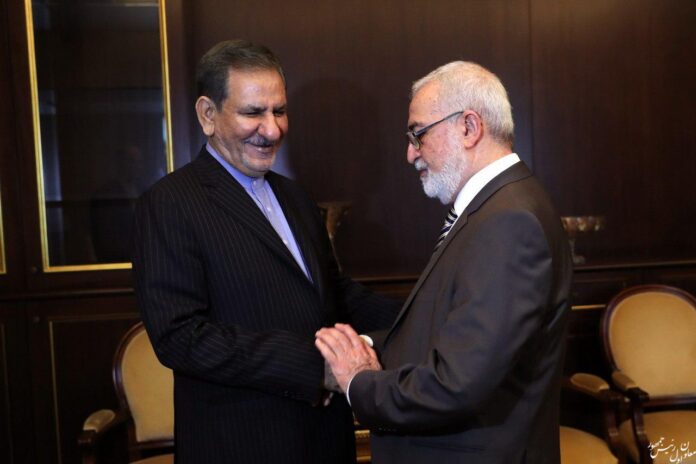 Iranian First Vice President says the Islamic Republic has been and will be next to the Iraqi people in rebuilding the country following the devastating war it had with ISIS terrorists.

Es’haq Jahangiri said Iran is standing next to its Sunni and Shiite Iraqi brothers, and hopefully Iraq will be reconstructed as soon as possible.

He made the comments in a meeting with the ex-speaker of the Iraqi Parliament Ayad al-Samarrai, who is currently the Secretary-General of the Iraqi Islamic Party, said a Farsi report by IRIB News Agency.

“I hope that with more unity among the Sunnis, Shias, and Kurds, a great movement will take shape in the reconstruction of Iraq, and this great nation can play its historic role in the region.”

Referring to the capacities of Iran for the development of Iraq, Jahangiri said “The Islamic Republic of Iran, in the difficult days and in the wake of victories has been next to the Iraqi government and people, said.”

“The victories of the Iraqi people against ISIS and maintaining of the country’s integrity is due to existence of great Iraqi figures, and these figures can help in the development and reconstruction of the country in the new era,” added Jahangiri.

Expressing the readiness of the Iranian private sector to invest in Iraq, he said “Indeed, the private sector’s participation will accelerate the reconstruction of this country.”

For his part, Ayad al-Samarrai appreciated the positive views of the Islamic Republic of Iran in recent years regarding the rebuilding of Iraq saying that the country has faced two major challenges: Expelling the US occupation forces and eradicating the terrorists; but the most important mission today is to attract investments to reconstruct Iraq.

“We are very pleased with Iran’s views on investing in Iraq, and we do emphasize that there are good investment opportunities in Sunni regions and we welcome the investment of Iranians in these regions.”

Earlier, Jahangiri said the Islamic Republic is prepared to provide Iraq with a line of credit (LOC) worth up to three billion dollars to pave the ground for the Iranian private sector’s active participation in the reconstruction of the Arab country.

He made the comments in his Wednesday meeting with Iraqi Prime Minister Haider al-Abadi in Baghdad.

Jahangiri stressed that Tehran and Baghdad must work to remove the barriers in mutual banking relations, which is the main obstacle in the way of closer trade ties between the two countries.

The Iranian first VP, who was in the Iraqi capital Baghdad to join an Iranian business delegation led by Minister of Industries, Mining and Trade Mohammad Shariatmadari, hailed Tehran-Baghdad relations as “strategic,” underlining that the commonalities between the two countries can pave the way for the promotion of bilateral economic ties.

Heading a high-ranking politico-economic delegation for a three-day visit to Iraq, Jahangiri said on Wednesday that the two states need a “comprehensive roadmap” for their economic cooperation.

He also called for the promotion of collaborations with Iraq in other areas, including pharmaceuticals, energy, customs, and the expansion of railway routes.

Abadi, for his part, said Iran and Iraq have strong historical ties and the two sides are seeking to consolidate them in economic, political, cultural, commercial and other fields.

The Iraqi prime minister also expressed gratitude for the Islamic Republic’s role in the country’s reconstruction and underlined that the Iranian private sector has made substantial investments in the process.

During his three-day visit, Jahangiri is to visit the holy shrines of Imam Hossein (AS) in Karbala, some 110 km southwest of Baghdad, and Imam Ali (AS) in Najaf, 160 km south of the capital.

The ties between Iran and Iraq are very strong as the Iraqi armed forces, backed by Iranian military advisors, fully liberated their homeland from ISIS terrorists last December.