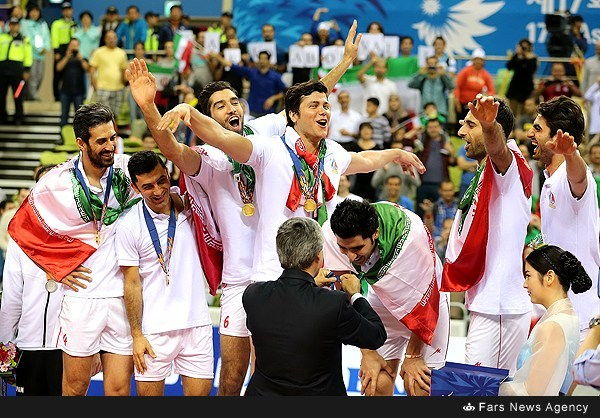 Iran men's national volleyball team has finished in the first place at the 2014 Asian Games in Incheon, South Korea, after it achieved a convincing victory over the Japanese squad.

The Japanese side opened the game in a convincing fashion, taking an early lead. Iranian sportsmen then established themselves and eventually finished the set at 28-26.

The Japanese volleyball players took the game to the wire in the second set, and got the chance to close the gap. They took advantage of the Iranians’ mistakes, had proper coordination and team unity, and managed to steal a 25-23 victory.

The Iranian volleyball players regained the lead in the third set, and continued to exert a spell of pressure on their rivals. They won the set 25-19.

The outcome of the first and third sets inspired the Iranian squad to play with more vigor in the last set. The Iranians managed to exhibit an almost spectacular performance, and finished the final set at 25-19.

In the other match of the day, South Korea swept China 3-1 to claim the bronze medal.

The 2014 Asian Games began in South Korea’s northwestern city of Incheon on September 19, and will wrap up on October 4.

Some 9,500 athletes from 45 countries are competing at the Games. The sports event is the world’s second-biggest multi-sport event after the summer Olympics, with 439 gold medals in 36 sports up for grabs.

Iran has participated in the tournament with 276 athletes in 22 sports.