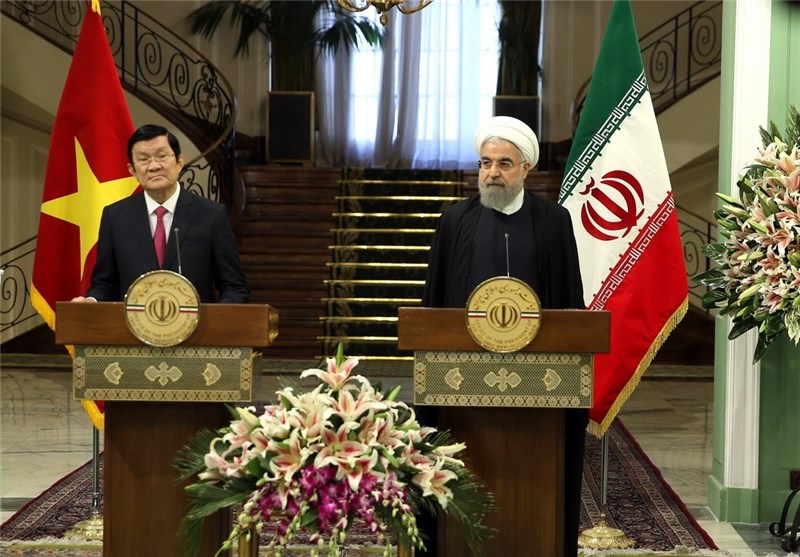 Iranian President Hassan Rouhani on Monday hailed the existing potentials for expansion of trade ties between Tehran and Hanoi, and declared a decision by the two sides to boost the annual bilateral trade to $2 billion in five years.

“In economic issues, despite the existence of very good capacities and potentials, we have failed to use them in recent years, mostly because of (anti-Iran) sanctions,” Rouhani said in a joint press conference with his Vietnamese counterpart Truong Tan Sang here in Tehran.

He added that comprehensive talks were held today between the two presidents on the issue, and it was decided that the current trade value of $350 million be increased to $2 billion in the next five years.

“It was also decided that a Memorandum of Understanding (MoU) be signed between the two countries’ central banks,” Rouhani added, stressing that the MoU can be the first step for enhancing the level of mutual economic cooperation.

“In such important fields as energy, industry, agriculture, tourism, investment and information technology, detailed talks were held and agreements were made in the joint meeting between the two sides,” he said.

“I am sure the visit will be a very good starting point for the development of bilateral ties,” the Iranian president stressed.

The Vietnamese president, for his part, underlined the need for reinforcement of joint cooperation and mutual support for all-out progress and development.

“We agreed that economic and trade cooperation is our main priority, and that we should prepare the grounds for activity of both countries’ private sectors to tap into the existing potentials and advantages,” Sang, who arrived in Tehran at the head of a high-ranking delegation on Sunday night, went on to say.