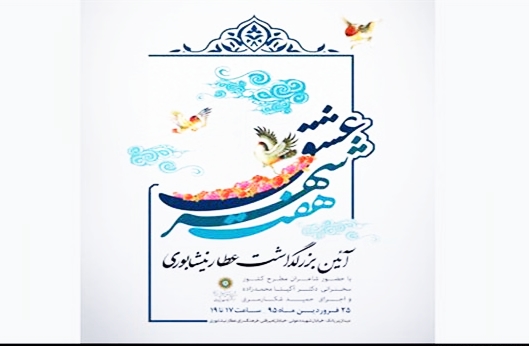 Among the programs is ‘Seven Cities of Love’ which is scheduled to be held today at Attar Culture Academy in Tehran. It will be attended by poets namely Ali Aban, Ehsan Afshari, Sajjad Azizi and those interested in Attar.

Born in Neishabour, Khorasan Razavi province in 1142, Attar was a poet during the Seljuk rule and his works were mostly inspired by the Persian Sufi poet Molana Jalaleddin Rumi.

According to Iranian literary figure, Mir Jalaleddin Kazzazi, Attar is a master of Persian language who was thoroughly familiar with the delicate and elegant aspects of the language, and featured a divine bond with the Almighty in his poetry.

Attar’s talent for perception of deeper meanings behind outward appearances enabled him to turn details of everyday life into illustrations of his thoughts.

However, his masterpiece is the ‘Manteq-al-Tayr’ (The Conference of the Birds) in which he describes a group of birds (individual human souls) under the leadership of a hoopoe (spiritual master) who determine to search for the legendary bird Simorgh (phoenix).

The birds must confront their own individual limitations and fears while journeying through seven valleys before they ultimately find the Simorgh to complete their quest.

The 30 birds who ultimately complete the quest to discover that they themselves are the Simorgh they were looking for, playing on a pun in Persian (‘si’ and ‘morgh’ which means ’30 birds’) while giving an abstruse teaching on the presence of the divine light within us.

Attar was beheaded by the invading Mongol army in 1221. His tomb, in Neishabour, Khorasan Razavi Province, attracts many visitors throughout the year.