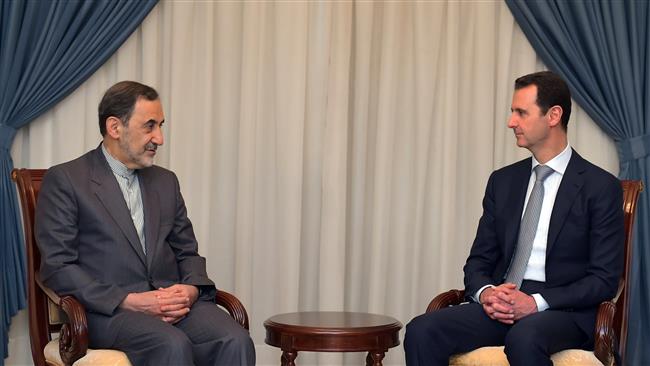 The Supreme Leader’s advisor says that Iran is certain that victory will be the Syrian people’s and resistance’s.
Tag: Syria

A senior Iranian official says the Syrian government and people have managed to leave their mark in history by standing up to aggressors.

Ali Akbar Velayati, a top adviser to Leader of the Islamic Revolution Ayatollah Seyyed Ali Khamenei, made the remark in a meeting with Syrian President Bashar al-Assad in the Syrian capital, Damascus, on Sunday.

“Thanks to your and the Syrian people’s presence and courage, a glorious and matchless period has been recorded of Syria in history,” he told the Syrian head of state.

“You are a source of pride because you have stood up to the enemies of Islam, this global war, and extremist Takfiri movements,” Velayati noted, saying Ayatollah Khamenei has “always supported the Syrian government and people and prays for your victory.”

He said, “We are certain that victory will be the Syrian people’s and resistance’s.”

Assad said Syria and its friends were determined to move ahead with fighting terrorism in all its forms, according to the official Syrian Arab News Agency (SANA).

He said the resolve to fight terrorism will continue despite what he condemned as the recent escalation by some hostile countries who, while claiming to be fighting terrorism, have beefed up funds and armaments to the terrorist gangs.

The foreign-sponsored conflict in Syria has, since breaking out in March 2011, claimed the lives of more than 250,000 people and left over one million others injured, according to the United Nations. The Syrian government has accused the West of complicity in the provision of assistance to the Takfiri terrorist group of Daesh [ISIS], which has overrun parts of Syria and is tyrannizing the civilian population there.

After the meeting with Assad, Velayati attended a meeting with Syria’s Foreign Minister Walid al-Muallem, during which he predicted a very positive outlook for Syria.

“Iran and Syria’s fate are interlinked; and both countries have been by each other’s side at the time of difficulties,” the Iranian official said.

“This perseverance and the friendly and strategic ties are the secret to victory, which is being realized more and more every day and has nullified the conspiracies of the enemies.”

The top Syrian diplomat, for his part, said Syria and Iran have common views regarding Syria’s affairs, regional developments, and the fight against extremism and terrorism.

Iran has sent military advisers to Syria to help in the fight against the terrorists wreaking havoc in the conflict-stricken country. Russia has been striking Daesh, al-Nusra Front – another Takfiri group – and other terrorists in Syria since September 30, upon a request from Damascus.