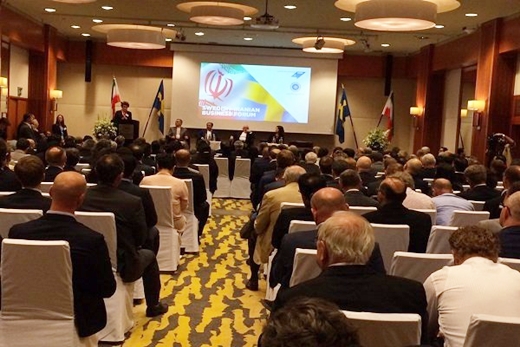 The conference will address ways for fostering mutual cooperation, evaluate the two countries’ markets, as well as examine Iran’s situation during the post-sanctions era.

Zarif, who is leading a 60-member trade-economic delegation to Europe, arrived in Stockholm on Tuesday night on an official visit to discuss bilateral ties with senior Swedish officials.

Zarif started his tour of Europe on Sunday evening and arrived in Warsaw for the first leg of his tour.

While in Warsaw, he met senior Polish officials and attended an economic and trade meeting and also a meeting at Warsaw University which was attended by professors, students and a considerable number of foreign ambassadors.

After ending his visit to Poland, Zarif and his accompanying delegation arrived in Finland.

In Finland, the Iranian top diplomat participated in a political meeting held in Helsinki for the first time by the Finnish government, for the purpose of exchanging regional dialogue. Zarif met his Finnish counterpart Timo Soini, attended a joint press conference with him, then met the Finnish Parliament Speaker and President.

Sweden is the third leg of Zarif’s tour of Europe. His last stop in Europe will be Latvia.