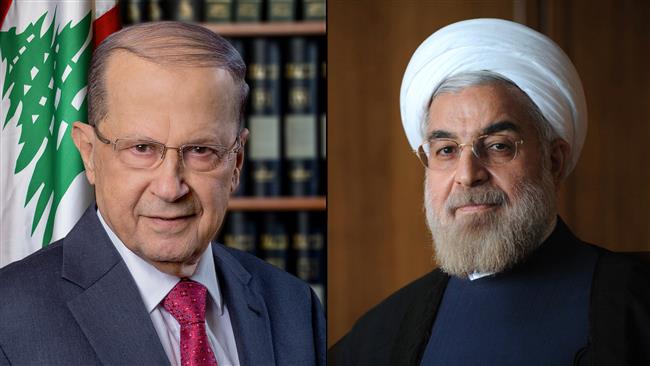 Iranian President Hassan Rouhani says the Islamic Republic will always stand by Lebanon and spare no effort to help improve the country’s stability.

In a phone conversation with Lebanese President Michel Aoun on Tuesday, Rouhani said Tehran and Beirut had a “very friendly and growing” relationship.

“The Islamic Republic of Iran has always called for the safeguarding of peace and stability in regional countries, including Lebanon,” he added.

The Lebanese people have always managed to settle their major problems through national unity, the Iranian president noted.

He expressed confidence that the Lebanese people would thwart the “new plot” against the country through their wisdom, in reference to the sudden resignation of Prime Minister Saad Hariri.

Rouhani emphasized that the Lebanese people would not allow others to turn their country into a battlefield for “the clash of foreign powers” and provide terrorists with a chance to return.

Hariri announced his resignation in a televised statement from Riyadh on Saturday, citing many reasons, including the security situation in Lebanon, for his sudden decision. He also said that he sensed a plot being hatched against his life.

The surprise announcement has sparked a new political crisis at home in Lebanon, fueling speculations that the premier had been forced by the Riyadh regime into stepping down.

The Lebanese president on October 31 stressed Iran’s significant role in the Middle East, saying the Islamic Republic was a regional power and part of the solution to the region’s woes.

In his Tuesday phone conversation with Rouhani, Aoun said the Lebanese people were vigilant about new developments in the country despite the ongoing difficult situation.

Despite some efforts to stoke unrest in the country, Lebanon and its people are going about their ordinary affairs in total calm and tranquility, the Lebanese president added.